Randal recruits Elias (Trevor Fehrman) plus Jay and Silent Bob(Jason Mewes and Kevin Smith) to help out. Dante helps but is still mourning the loss of his wife Becky and their unborn child after she was killed by a drunk driver. The stress from Randal takes its toll on Dante and he suffers a more serious heart attack.

After realizing what a jerk he’s been, Randal gets help from Jay and Silent Bob to sneak into Dante’s hospital room to show him a rough cut of the film. Dante subconsciously watches it with Becky and says it’s the best movie he’s ever seen, and he dies moments later.

Randal mourns his best friend and continues running the Quick Stop with Elias after he helps Randal pay back Dante’s ex-fiancé Emma for loaning him money for the film. As Randal misses Dante, his spirit stands alongside him. 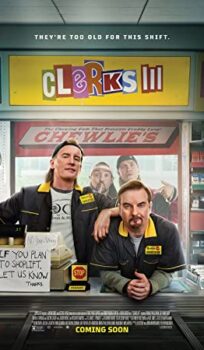