Close Encounters of the Third Kind(1977)

The thing that Roy Neary (Richard Dreyfuss) and many others kept seeing in everyday shapes was the Devil’s Tower in Wyoming. Aliens had been trying to communicate this to any Earthling willing to accept an invitation for contact. He eventually makes it there along with Jillian Guiler (Melinda Dillon), where they find that the government has already set up a huge landing strip for the aliens’ arrival. After the mothership lands, many earthlings that have been abducted over the years are returned, including the crew from Navy Training Flight 19, which disappeared in the Bermuda Triangle in 1945. Also, Barry Guiler (Cary Guffey), who had been abducted early in the movie, is reunited with his mother, Jillian. Roy is chosen by the throngs of aliens to join them on their journey home. He enters the mothership and it heads off into space with John Williams’ incredible musical score as a backdrop. 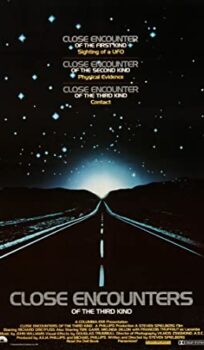