Pooper
After donning a clown suit made from the skin of an Icelandic demon, The Cloyne, a father (Andy Powers) turns into a child-eating demon. If he eats five children, the curse ends. He kills four kids, plus his father-in-law (because he was getting in the way of the final killing at the Kent’s home) then goes after his own son. His wife kills and decapitates him.

Longer Spoiler
When a clown-for-hire is a no-show for a little boy’s 7th birthday party, his dad, realtor Kent (Andy Powers) finds a clown suit in a trunk at one of the properties he has listed for sale. He falls asleep, and the next morning realizes that the clown suit, nose, white makeup, and wig won’t come off. He finds the last owner of the suit, Karlsson (Peter Stormare) who tells him that the suit is a curse made from the skin of a Icelandic demon, which will transform him into the demon, “Klun”. The suit will not come off and the curse will not end until he kills and eats five children — one child for every month of winter. Karlsson then tries to kill him because he knows what will happen. (Karlsson got his five kids because his brother was a doctor in a pediatric cancer unit who brought him dying children to eat). Karlsson end up in the hospital after trying to kill Kent, who is evidently very efficient at self-defense. Kent then tries to commit suicide with a gun, but it seems as though he can’t die even after shooting himself in the head.

Kent’s wife, Meg, realizes pretty quickly what’s happening since Kent brought home Karlsson’s journal and tries to stop Kent, who ends up killing four children: a lonely & unsupervised latch-key kid from the apartment building where Ken tried to hide out; a latchkey-kid bully who picked on Kent’s son, Jack (Christian Distefano); and two kids at a Chuck E. Cheese: one in the ball pit, and another in the habitrail maze. The wife finds Kent/Klun in the C.E.C. miniature golf course, who says that one more child will end the curse and she’ll get her husband back. The wife then pretends to take a neighborhood girl home from the C.E.C. parking lot (the girl was there for a party and her mom couldn’t be reached after the dead kids were found) to her husband as the final offering so that he will be released from the curse, but the girl runs off when the cops show up. Meg goes back home.

Completely transformed into the demon now, Kent/Klun returns home, kills the [pain-in-the-butt interfering] father-in-law and tries to kill his wife, who fends him off — first with an axe, then a knife. She is knocked unconscious by evil clown man-demon while their son Jack  hides in the house. Demon clown finds Jack just as Meg strangles Kent/Klun with a chain, and then ties the chain to a post. After Meg asks her son to get the journal so that they can help daddy, Jack says, “that’s not daddy”. Meg realizes this is true and smashes demon-clown’s head with a sledgehammer, then removes the head from the body, finally killing the demon, who has rainbow-colored blood. Demon-clown’s body turns back into Kent’s.

At the autopsy, the demon suit finally comes off. 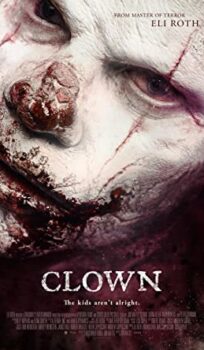