Loretta’s (Sissy Spacek) meeting with fellow singer Patsy Cline (Beverly D’Angelo) marks a positive turning point in her life and career. They perform together, Loretta even dedicates a performance of Patsy’s own hit song “I Fall To Pieces” to her while she recovers from a car crash, and, in turn, Patsy becomes her confidante, particularly after an incident in which a drunken Doo (Tommy Lee Jones) causes a physical scene and, while defending herself from him, Loretta busts his hand. Despite this altercation, later that same night, Doo owns to his promise and finally gets Loretta a wedding band -which he had not been able to do for many years since they got married, because of financial difficulties-; at the same time, however, he announces his intention of getting a manual labor-related job and just have Loretta find someone else to manage her musical career, but Loretta doesn’t want that because she loves him dearly and has always acknowledged that it was his dogged efforts that got her to where she was.

Loretta becomes pregnant for the fifth time (eventually giving birth to twin girls, whom she names “Peggy Jean” and “Patsy”) and tells Patsy, who joyfully offers to take her baby shopping. Unfortunately, Patsy dies in a plane crash, leaving Loretta heartbroken. She carries on and successfully continues her career, alternating between touring, performing, composing, tending to fans, and supporting her family, while Doo and the children are at home -her now well-known ranch at Hurricane Mills, Tennessee. The overexertion, however, takes a toll and she finds herself faltering on some of her performances and even suffering a nervous breakdown at a concert, in front of a shocked full-house audience and an anguished Doo who hauls her away.

They decide to take time off for themselves and their family, at their Tennessee ranch. Not too long after, Loretta goes back to performing and the final sequence of the film has her singing one of her signature tunes, “Coal Miner’s Daughter”, in front of a massive audience, while Doo lovingly smiles at her from a distance, thus cementing herself as “The First Lady of Country Music”. 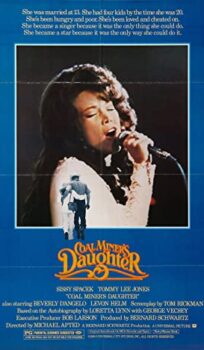