While Cobretti (Sylvester Stallone), Gonzales (Reni Santoni), and Stalk (Lee Garlington) are driving Ingrid (Brigitte Nielsen) to a safehouse somewhere upstate, Cobretti notices that Stalk’s behavior is looking more and more suspicious and he comes to think that she may not actually be a cop. Sometime after they, Ingrid, and Gonzales stop at a motel in a small town to rest for the night, Cobretti catches Stalk using a payphone to call somebody despite having a phone in her room, and when he asks her about this, she claims that the phone is out of order. Drawing the (correct) conclusion that Stalk is in league with the New World and has told them to come here, Cobretti returns to his room and makes ready his weapons.

At dawn, the New World arrives in the small town, and a small band of members hold up the sheriff and all of his deputies at their station to keep them from interfering in their group’s plans. Meanwhile, Cobretti and Ingrid meet with Gonzales outside of their rooms, and Cobretti tells Gonzales to check on Stalk to see why she isn’t out here yet. After looking in her room, Gonzales informs Cobretti that she is gone, and Cobretti and Ingrid then notice her meeting with a New World member a short distance away and see other armed men and women taking positions near her. Cobretti, Gonzales, and Ingrid take cover in their rooms, and a ferocious gunfight erupts shortly afterward. Cobretti and Gonzales kill off a bunch of the villains until Gonzales gets non-fatally shot, after which Cobretti flees with Ingrid in his truck. Cobretti kills some more of the New Worlders when they give chase on their motorcycles, but the truck soon gets rendered useless after Ingrid crashes through a barricade that the New World had set up, forcing her and Cobretti to flee on foot into a grapefruit orchard. As Cobretti kills more of their pursuers, he sends Ingrid off into a nearby foundry thinking that she will be safe there, but Stalk spots her and chases her inside. Cobretti soon goes in there, followed by the Night Slasher (Brian Thompson), Cho (John Herzfeld), and however many members of the New World are left.

Cobretti wipes out the last of the underlings and kills Cho by setting him ablaze, and we then see Ingrid trying to climb up a ladder to a higher floor to escape Stalk. Just as Stalk catches up to her below, Cobretti appears and shoots Stalk, but then Ingrid is surprised at the top of the ladder by the Night Slasher. Cobretti shoots at him, but he gets away, and Cobretti quietly pursues him through the foundry until he locates him close by and stays out of his field of vision. The Night Slasher goads Cobretti to come out and fight him and defiantly declares that he cannot stop the New World, after which Cobretti emerges and points his machine gun right at him. The Night Slasher mocks Cobretti by telling him that, because he is a cop, he has to take him into custody if he can, and the courts – given how civilized they are – will just declare him insane and spare him from a harsh punishment. Cobretti replies that he is not like the courts, because this is where the law stops and he starts. Suddenly, Stalk surprises Cobretti from behind and tries to choke him, and the Night Slasher tries to take advantage of the distracted Cobretti by shooting him, but he accidentally kills Stalk instead. Cobretti then brawls with the Night Slasher until he overwhelms him with several heavy blows to the body and head and then impales him on a roaming foundry hook, and the hook carries the Night Slasher right into a furnace and incinerates him. Having witnessed the battle from a safe distance, Ingrid goes up to Cobretti and embraces him before they leave the foundry.

They head back to the motel and find that police officers, emergency services, and news crews have arrived there, and Cobretti checks on Gonzales to make sure he is okay before he gets loaded into an ambulance. Detective Monte (Andrew Robinson) and Captain Sears (Art LaFleur) then appear and meet with Cobretti, and Sears commends him for stopping the New World before saying that, if he ever wants a transfer from the Zombie Squad for something easier, or if he needs anything at all, all he has to do is say the word. After he leaves, Monte – who dislikes Cobretti because he feels that Cobretti always willfully ignores police protocols – tells Cobretti that there are no hard feelings, but then takes a verbal jab at him by saying that, if he were in his shoes, he would have looked for a more subtle solution to this problem. He then offers a handshake, which Cobretti takes, but then Cobretti punches him in the face. He then drives off with Ingrid on one of the motorcycles that the New World came in on. 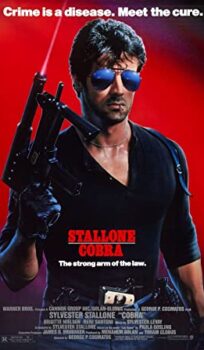