Em (Emiliy Baldoni) realizes that the comet has resulted in not just two, but many, many alternative realities. Each time they leave the house, they find themselves in a particularly dark area, which is sending them to a different, random universe each time.

The house she is currently in, is not the one she started out in. And when she checks with everyone else in the house, she discovers that they are almost all from different universes as well.

Mike’s (Nicholas Brendon) blackmail note to himself is suddenly slipped under the door. Hugh (Hugo Armstrong) picks it up and learns of Mike’s affair with his wife. He attacks Mike and has to be pulled off by the others. Suddenly a second Mike bursts through the door and hits this Mike several times before retreating. In the ensuing chaos, Em leaves the house.

She goes to several alternative realities, looking through the windows of the house, until she finds one where she and her friends are oblivious of what is going on. They’re all happy and she and Kevin (Maury Sterling) are happy together, planning to go to Vietnam as a couple.

Em lures out this universe’s version of herself and attacks her, locking her in the trunk of her car and taking her place inside the house. While the others go outside to watch the last of the comet, Em spots yet another version of herself, apparently weakened, and attacks it, leaving it in the bathroom. Afterwards, Em collapses.

When she wakes up the next day, the Em in the bathroom is gone. She goes outside and meets Kevin. As they talk he gets a call on his cellphone and answers it. It’s another Em calling him. 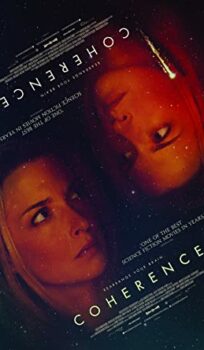