Paul (Paul Giamatti) learns from Nina (Dina Korzun) that his soul has been taken by the Russian boss’s wife (she is under the impression that she’s been given Al Pacino’s soul instead). He accompanies Nina to Russia, where they eventually make the soul switch (the boss’s wife parties too hard one night and passes out; Paul and Nina take her to the lab and quickly perform the soul transplant procedure). While there, he also learns that the soul he had previously rented belonged to a woman named Olga, who recently killed herself; that soul seems to be absorbed into his self by the time Paul gets his own soul back.

Paul returns home to NY, only to learn that the Soul Storage business is being virtually shut down by homeland security investigations. He talks to an agent about getting Nina’s original soul back, but the agent says she’s got too many fragments of other people’s souls (from her time as a “mule”) inside her already to ever have her own again. Disheartened, Paul walks the streets of NY in the evening, pausing finally at the shore at sunset. The last image of the film is his silhouette against the sunset, merging slowly with that of a woman (Nina? Olga? it is purposely unclear), and the screen fades to black. 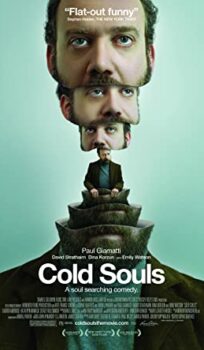