Gloria is horrified by the death and destruction she’s unwittingly brought on Seoul but Oscar, bitter about having never left their hometown and resentful of Gloria that she did, seizes upon this as a way of revenge. He threatens that if Gloria ever leaves their hometown or her job working for him, he’ll use his robot form to destroy Seoul.

Gloria leaves town and Oscar, not knowing where she’s gone, waits until 8:05 am to carry out his threat. His robot form appears in Seoul. Gloria is in Seoul too, however, causing her monster form to appear in her hometown at the playground. Acting as the monster, she picks Oscar up and hurls him miles through the air. In Seoul everyone watches the robot rise into the air by an invisible force and then vanish into the distance. They celebrate the defeat of the murderous robot, unaware that the American woman in their midst is the one who defeated it. 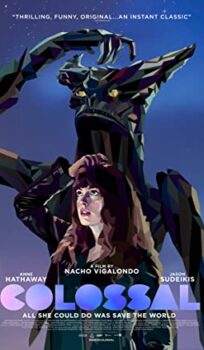