POOPER:
Colossus takes over the world.

LONG:
Dr. Charles Forbin (Eric Braeden) heads a team that constructs COLOSSUS, a huge computer complex built deep within the Rocky Mountains. It is designed to take control of all U.S. military responses, thereby removing all threat of human error. Shortly after coming online, Forbin realizes the system is far more advance than expected, and it begins to exhibit self-awareness. Built to be completely impervious to damage or attack, there’s no way for the team to shut it down.

Soon, COLOSSUS detects the existence of GUARDIAN, a similar system built by the Soviets.  Intrigued, COLOSSUS demands the governments set up two-way communication between them. They comply but soon the systems create their own language which the humans cannot decipher.  When both the President and the Soviet Premier break the communication link, both systems launch a nuke at the other’s nation just to prove who is in charge.   Eventually, COLOSSUS merges with GUARDIAN and the two systems become one.  A last-ditch effort to sabotage and disarm the missiles controlled by COLOSSUS fails. To once again prove who is boss, COLOSSUS sets off a nuke inside its silo, killing thousands.   COLOSSUS prints out orders for the construction of an even larger complex to house its ever-expanding intelligence.

The film ends with Forbin weeping as COLOSSUS preaches that all mankind will soon realize the wisdom of serving the system; because only it can guarantee true world peace (which the system was designed to ensure) and also because they have no choice. 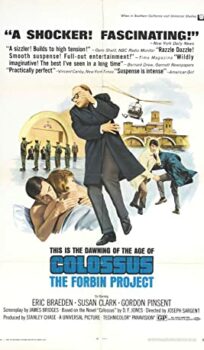