Dr. Susan Wheeler (Genevieve Bujold) is a surgical resident at Boston Memorial Hospital.  After two patients, one of which is her best friend, fall into irreversible comas following routine surgical procedures, she discovers that several otherwise healthy people are also in irreversible comas after having routine surgeries, and all of the surgeries were in the same operating room.  Her investigation of the other patients gets the attention of Chief of Surgery Dr. Harris (Richard Widmark) and Chief of Anesthesiology Dr. George (Rip Torn).  She is pressured by them to stop investigating or she will lose her job.  She is also told to stop by her boyfriend Dr. Mark Bellows (Michael Douglas), the Chief Surgical Resident who is afraid that he will lose his job as retaliation for “not controlling” Susan.

Susan continues investigating anyway, and later talks to a pair of pathologists as to how a patient can be intentionally put into an irreversible coma.  The three figure out that if oxygen is replaced with carbon monoxide in the anesthesia, no one would notice until it was too late.  She later is approached by a maintenance worker, who tells her he knows how the patients are being put into comas.  However, he is killed by a hitman before he can tell her.  Susan checks out the anesthesia in OR #8 (where all of the patients were operated on), and discovers that the pathologists’ plan is exactly how it’s being done.  A tank of carbon monoxide is being piped into the OR, and there is a control box on the other side of the wall that is activated when the oxygen is to be replaced by the carbon monoxide.  She tells Mark, but he is having trouble believing that the hospital is intentionally putting patients into comas.  Later, Susan is being chased by the same hitman who killed the maintenance worker, but she is able to get away from him by hiding in the morgue and pushing several cadavers on top of him.

Susan investigation also reveals that all of the coma patients are being transferred to the Jefferson Institute, a facility that deals with the long-term care of coma patients.  In order to make room for as many patients as possible, and to prevent bed sores, the patients are hung from wires.  While taking a tour of the facility, Susan sneaks away and discovers the coma patients are having their organs harvested.  She also hears the organs being auctioned off to the highest bidder and some of the money is being kicked back to Dr. George.  She is discovered by the Institute’s security team, but she gets away by hiding on top of an ambulance.  Susan then goes to Dr. Harris and tells him everything.

While talking to Dr. Harris, she figures out that the Dr. George receiving the kickbacks isn’t the Chief of Anesthesiology, but Dr. George Harris, whom she is talking to.  Dr. Harris then drugs Susan, making it look like she is having appendicitis.  Dr. Harris tells the surgical team, including Mark, that he will be performing the surgery himself.  But when he tells the nurses that he specifically wants to perform the surgery in OR #8, Mark figures out that Susan is telling the truth and Dr. Harris is involved.  While Dr. Harris is preparing to perform the operation, Mark is in the maintenance area looking for the tank of carbon monoxide.  He doesn’t find it, but finds the pipe leading into OR #8 and the control box.  He smashes the box just as the anesthesia is kicking in.  After the surgery is complete, Susan doesn’t wake up.  Dr. Harris is pretending to be concerned, but is shocked when Susan does wake up a few moments later.  As she is being wheeled out of the OR, Mark can be seen in the hallway with several police officers.  The movie ends with Dr. Harris, still in the OR, realizing that he has been caught. 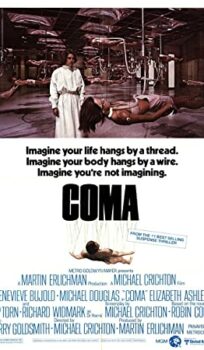