30 years after his fateful trip to America, Akeem Joffer (Eddie Murphy) is now king of Zamunda, with Lisa McDowell as his queen. They have raised three daughters – Meeka, Omma, and Tinashe – but none of them can succeed him because Zamundan law dictates that only a male heir may rule next. As his father King Jaffe (James Earl Jones) lays dying, Akeem is informed that he has a son conceived from just before he met Lisa in Queens. His best friend and aide Semmi (Arsenio Hall) reveals that he got two women to hook up with them, and Akeem had a drugged encounter with a woman named Mary Junson (Leslie Jones). Jaffe’s dying wish is for Akeem to find his son to succeed him, especially since the neighboring nation of Nexdoria, led by General Izzi (Wesley Snipes), considers Akeem to be more vulnerable than Jaffe, and therefore may be easier to assassinate.

Akeem and Semmi travel to Queens once again to meet his son, Lavelle (Jermaine Fowler), who scalps tickets while trying to find a real job. Lavelle goes to Zamunda with Mary, and he must take up his princely duties through tests. Meeka is none too happy with his presence since she wanted to be queen and has trained for it her whole life. Lavelle also starts to fall for the royal groomer, Mirembe, who encourages him to be a prince not in the traditional sense, but as himself.

After Lavelle officially becomes a prince, he is set to wed Izzi’s daughter Bopoto, but he doesn’t connect with her because Nexdorian women are taught to serve their husbands. He realizes he loves Mirembe and wants to tell Akeem, but he overhears Izzi tell Akeem that he used his own son as a pawn, and now they will get what they want. Lavelle returns to Queens with his mother, uncle, and Mirembe. Akeem discusses fatherly duties with Lisa’s father Cleo and goes after Lavelle.

Akeem finds Lavelle about to marry Mirembe in a janky church, and he apologizes for not letting him follow his heart as he once did. At the same time, Akeem’s daughters fend off Izzi and his soldiers when they want to retaliate against Akeem for going back on their agreement. Akeem returns with Lavelle, who marries Mirembe in the palace. Akeem also decides to rewrite the laws to make it so that Meeka will become queen when he is gone. 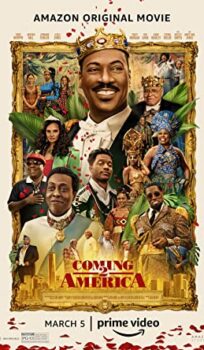