A fictionalized version of the famous Leopald and Loeb murder case.

Arthur Strauss (Bradford Dillman in the Leopold role) and Judd Steiner (Dean Stockwell in the Loeb role) are students at the Univ of Chicago.  Both are arrogant spoiled sons of very wealthy parents.  They begin committing petty crimes for the fun of it, and escalate to bigger crimes.  Arthur is the leader, who pushes Judd to participate.  To prove that they are smarter than anyone else, they decide to commit the “perfect crime”, a murder that can not be solved.  They abduct Paulie Kessler (Robert Franks in real life), murder him, dump the body, but send a ransom note.  Since they have no motive and no connection to the victim, they think they will never be suspected.

Things unravel because Judd’s glasses fell out of his pocket when they dropped the body.  Arthur’s family and Paulie’s were neighbors and casual acquaintances.  Arthur insinuates himself in with the police trying to plant false theories and incriminate innocent people.  The glasses are an unusual type that were only sold to 3 people in the city. The police can prove that the ransom letter was typed on Judd’s typewriter.  The pair break down and confess.  Their families hire famous attorney Jonathan Wilk (Orson Welles, playing the real life Clarence Darrow).

In the middle of the trial, Will realizes it is hopeless and changes their plea to guilty due to insanity.  Wilk turns the trial into a circus.  He claims they did it because there parents were harsh and indifferent.  Wilk gives a 12 minute long pedantic lecture against the american criminal justice system and how all society is too blame, not the two killers.  The judge is persuaded to give them jail sentences rather than death penalty.  Judd and Arthur show no remorse or regret.  They are angry at the lawyer, since they view themselves as superior men who should not have been punished at all. 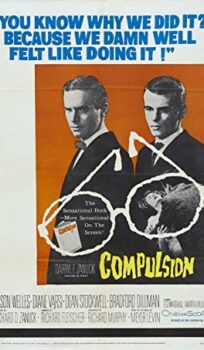