It turns out that the killer gorillas were bred to be killers by the ancient inhabitants of the city of Zinj so that they could guard King Solomon’s diamonds from intruders, but they ended up turning on their masters and killed them all.

The killer gorillas all meet their deaths, either by gunshot, by getting zapped with Karen’s (Laura Linney) phasic laser gun after she powers it up with one of the diamonds, or by being incinerated when Mount Mukenko erupts and covers them – along with the whole city of Zinj – with lava and fire. Only Karen, Peter (Dylan Walsh), Munro (Ernie Hudson), and the gorilla Amy (Lorene Noh & Misty Rosas) survive.

Karen & Munro go to the plane wreck of the second expedition sent after them (who were shot down by Zaire’s Air Force earlier on for violating their airspace) in order to retrieve a hot air balloon so they could get out of Zaire safely, and Karen uses the powered phasic laser to start up her transmitter and get in touch with her boss at TraviCom, Travis (Joe Don Baker). When she tells him that her fiancée (and his son) Charlie (Bruce Campbell) – killed near the start of the film – is dead, and he responds by demanding to know if she got one of the diamonds, she gets angry with him because she knows now that he sent her in for only a diamond and not for Charlie. She warned him earlier in the film that if Charlie was not the reason for her going into the jungle, she would make him sorry, so she has the laser destroy TraviCom’s satellite, ruining its chances to dominate the communications industry.

Peter, meanwhile, goes to Amy, where he learns that she decided to join the herd of silverback gorillas that the expedition came across earlier on, and they say their farewells to each other.

Karen, Peter, and Munro then fly off in the hot air balloon, and Karen tosses the diamond away as they fly away. 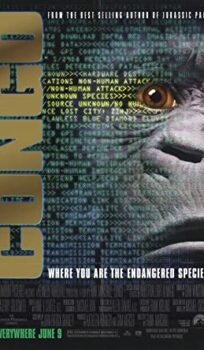