Jerry (Mel Gibson) is actually an assassin trained by the government (a la The Manchurian Candidate). He didn’t, however, kill Alice’s (Julia Roberts) father.

Jonas (Patrick Stewart), the rogue intelligence operative who trained Jerry and is trying to stop him from revealing his secrets, captures Jerry, but Alice finds him based on clues she finds in Jerry’s burnt-out apartment. Jerry kills Jonas during the scuffle, but not before Jonas pumps his gut full of lead.

Some time later, Alice is seen crying over Jerry’s freshly dug grave, placing his union pin on the name plate, and then riding the horse from the photo. A black SUV pulls up alongside the horse, and Jerry is inside. Jerry isn’t allowed to contact her, though, for her safety, and he is now working with Agent Lowry to capture all of Jonas’ accomplices.

As the movie ends, Alice finds Jerry’s union pin on her horse’s saddle, and she smiles, knowingly. 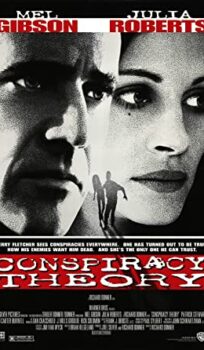