Beth Emhoff (Gwyneth Paltrow) comes home from a business trip to China, gets sick and dies, as does her young son, whom she infects.  Her husband Mitch (Matt Damon) is immune.  He and his daughter survive.

We see several people in various parts of the world getting sick and dying.  Dr. Ellis Cheever (Lawrence Fishburne) sends Dr. Erin Mears (Kate Winslet) to Minneapolis, where Beth lived, and where several people have died, to investigate.  She contracts the virus and dies.

Alan Krumwiede (Jude Law) is a blogger who gets wind of the story early on, and spreads rumors that the CDC is hiding the real cure, a homeopathic treatment called forsythia.  He schemes with a hedge fund manager to get the word out so that forsythia producers will get rich and he’ll get a piece of the action.  He is eventually caught, but how much he’s discredited is unclear.

Eventually, with the virus spreading fast, Dr. Ally Hextall (Jennifer Ehle) with the CDC thinks she’s developed a vaccine but it’s taking too long to test on animals before getting approval for human trials, so she injects herself and allows herself to be exposed to the virus.  The vaccine apparently works and production starts, as well as a lottery to see who’ll get it first.

Around 26 million people worldwide die by the time the vaccine is widely available.

The end shows where the virus originated.  It was in China when a bat ate part of a rotten banana then dropped it where a pig ate it.  The combination of viral elements created a new virus that mankind had no response for.  The pig was used in a dish served in a casino in Macao, where Beth Emhoff (Gwyneth Paltrow) picked it up when she shook hands with the chef. 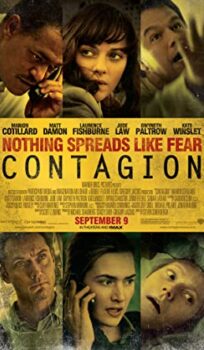