POOPER
Ernie travels back to Wyoming with Nell, and they get married.  Ernie goes back to Chicago and says they will get together every few months.

LONG VERSION
Ernie Souchak (John Belushi) is a reporter for the Chicago Sun-Times, and he is investigating a corrupt city councilman (called an Alderman in Chicago).  After getting beat up by two cops sent by the Alderman, Ernie’s editor orders him to leave town for his own safety.  He is sent to the Rocky Mountains in Wyoming so he can interview Dr. Nell Porter (Blair Brown), an environmentalist who is researching endangered bald eagles.

A guide takes Ernie up the mountain to Nell’s cabin, then says he’ll return in two weeks.  At first, Nell is not happy to see a reporter and demands that he leave.  When she realizes that Ernie cannot survive the climb back down without a guide, she reluctantly allows him to stay on the condition that he does not write a story about her.  Ernie didn’t want to write about her anyway because he thinks researching eagles is pointless, but he does admire her dedication to the eagles.  This becomes obvious when Nell chases away two hunters attempting to shoot an eagle.

As the two continue to spend time together, they begin to respect each other and Nell finally allows Ernie to write a story about her, which he is now happy to do.  While together, Ernie injures his back when he falls down the mountain and is later attacked by a mountain lion.  As Nell is nursing him back to health, the two fall in love and consummate their relationship.  When the two weeks are up, the guide returns and Ernie goes back to Chicago.  With Nell still on his mind, Ernie’s work suffers.  His article about his time in Wyoming is full of sexual innuendo, and his editor refuses to run it.  But Ernie is snapped back to reality when he learns that his confidential informant against the Alderman was “accidentally” killed.  A re-energized Ernie goes after the Alderman hard with his investigation and news columns.  The Alderman attempts to fight back by blowing up Ernie’s apartment, but Ernie’s perseverance wins out and the Alderman is forced to flee the country.

The day after the Alderman leaves, Ernie learns that Nell is coming to Chicago to speak at the Field Museum about eagles.  He sees her there and the two rekindle their relationship.  Even though they are in love, neither can bear the thought of leaving their respective parts of the country.  Ernie is at the train station saying good-bye to Nell, but decides to stay with her until the next stop.  He ends up travelling all the way to Wyoming with her.  Before he takes the train back to Chicago, Ernie asks Nell to marry him and she says yes.  They quickly get married by the local justice of the peace and Ernie races to make his train.  The movie ends with Ernie waving good-bye to Nell from the train and saying they will get together every few months. 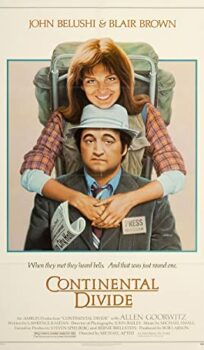