Chris Farraday (Mark Wahlberg) is pulled back into the smuggling world by his brother-in-law, Andy (Caleb Landry Jones) who threw some drugs overboard during a raid.  Andy owes those drugs to Tim Briggs (Giovanni Ribisi) who wants his drugs or will kill Chris’ family (wife, Kate Farraday (Kate Beckinsale) and two sons).

Even though Chris has gone legit he does one more run for fake money to Panama to help out his family.  While away Tim threatens Kate and the boys so they move in with Sebastian Abney (Ben Foster), old friend and former smuggler.

While in Panama the money exchange doesn’t go well and Chris is forced to help with an armoured car heist with his buddy Danny Raymer (Lukas Haas).   Chris and Danny get the fake bills, expensive painting with no frame from failed robbery along with the van for transport back to the vessel to get back to the US.  Andy had bought drugs and brought them aboard as Tim threatened Chris’ family again.

Chris realizes through boat-land phone conversations that Sebastian is working with Tim as he owes money to the big boss, Jim Church (David O’Hara).  Then Sebastian contacts Captain Camp (J K Simmons) stating the Chris is smuggling and he can have a share.  So the Captain gets authorities to board the ship prior to docking.  They find nothing.

Sebastian realizing that Chris will learn of his betrayal tries to get a deeper hold of Kate and the boys.  Kate doesn’t like this and leaves.  Once safe, Kate goes back to Sebastian’s to get her things.  Sebastian hits her head and thinks she’s dead.

Off the ship, Chris leads Tim and gang to where he hid the drugs (Captain Camp’s personal carpet cleaner which was on the ship).  Tim and gang get caught by Captain Camp in the living room by the police who were alerted when the house alarm system went off.

Chris worried about his wife and kids confronts Sebastian at his construction company site.  Sebastian says that she’s dead.  He placed her in a mold set for cement which he insists get filled right away out of schedule.  Chris calls Kate’s cell phone and realizes that she is in the mold.  He rescues her and she’s rushed to the hospital.

The fake money was dumped securely prior to the authorities coming aboard and rescued by Danny.  The van with painting with no frame is put up for auction and purchased by Andy.  The fake money is paid to Jim so all debts are paid.

In the end we see Andy, Chris and family in a beach house living happily ever after. 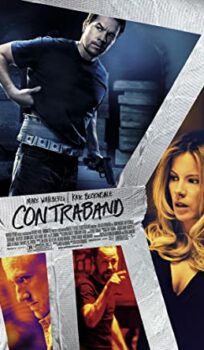