Ian Curtis gets married to Debbie while they are teenagers.

Ian is a sensitive poet and suffers from epilepsy that can’t seem to be controlled by medication.  He joins a band that becomes Joy Division,
a post punk rock band that influenced the melancholy alternative rock music of the 80s.

Ian and Debbie have a baby but Ian has an affair with a journalist named Annik.  Depression, seizures while performing on stage and a collapsing  marriage take their toll on Ian.

Two days before the band is to leave for their first American tour, Ian kills himself at the age of 23. 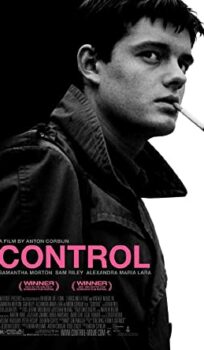