POOPER:
Based on DNA testing and recanted testimony, Kenny Waters is released from prison after 18 years, and is reunited with his daughter.

LONG VERSION:
In 1980, Katharina Brow is murdered in her mobile home in Ayer, Massachusetts.  Her neighbor Kenny Waters (Sam Rockwell) is questioned but later released.

Two years later, based on new evidence, Kenny is arrested for the murder.  The new evidence is testimony from Ayer police officer Nancy Taylor (Melissa Leo), his ex-wife Brenda (Clea DuVall), and his ex-girlfriend Roseanna (Juliette Lewis).  Despite claiming his innocence, Kenny is convicted and sentenced to life without parole.

Kenny’s sister Betty Ann (Hilary Swank) has always been close to her brother, even though they grew up in separate foster homes.  Despite Kenny’s tendency to get into trouble, she has always loved him.  When Kenny suddenly stops calling Betty Ann from prison, she becomes worried.  She later learns Kenny is in isolation for a suicide attempt because he doesn’t want to spend the rest of his life in prison and sees no other way out.  With no lawyers willing to take his case, Betty Ann decides to go to law school to become Kenny’s lawyer.  Her husband doesn’t support her and they eventually divorce.  With law school and her job taking away time with her two sons, they suggest they live with their father.  Betty Ann, having lost her brother, husband, and now her children, becomes depressed, begins struggling in school and considers dropping out.  However, her best friend in school Abra (Minnie Driver) convinces her to come to class again.

One day, the class learns about DNA testing, and Betty Ann realizes this is how she can get Kenny out of prison.  In addition to the testimony, blood evidence was used in Kenny’s trial, which showed Kenny and the killer had the same blood type.  DNA testing did not exist at the time of the trial.  Betty Ann contacts Barry Scheck (Peter Gallagher), who specializes in freeing the wrongly convicted.  He says that due to the backlog of cases, it will take over a year before they can get to it, unless Betty Ann can pass the bar and start looking for the blood evidence immediately.  With renewed energy, Betty Ann takes her studies seriously again, and both she and Abra pass the bar at the same time.  Betty Ann and Abra’s attempts to find the blood evidence are met with resistance, including learning that the evidence may have been destroyed.  Not deterred, they keep looking until they eventually find the old evidence box.  They also learn that Officer Taylor was fired recently for fabricating evidence in another case.  Now working with Barry, the blood is tested, and the test confirms that the blood was not Kenny’s.  However, the District Attorney will not dismiss the conviction against Kenny because of the testimony against him at the trial.

A distraught Kenny tells Betty Ann to stop because, no matter what she does, the DA will find ways to keep him in prison rather than admit they made a mistake.  Betty Ann presses on anyway, and she, Abra, and Barry talk to Roseanna about her testimony.  She admits that Officer Taylor coerced her into testifying against Kenny, claiming that if she didn’t, she’ll be charged as an accessory and have her children taken away.  Roseanna then realizes that she can be charged with perjury and refuses to cooperate.  They then approach Brenda, who tells them a similar story.  However, she won’t cooperate for another reason.  Since Kenny entered prison, she wouldn’t allow him to communicate with their daughter Mandy, which included erasing his phone messages and throwing away his letters to her.  If he’s released, he’ll want to see her.  All this time, Mandy believed that her father wanted nothing to do with her.  Now knowing that her mother lied to her about him, Mandy demands that she cooperate.  With Brenda’s testimony officially recanted, as well as the DNA testing, the DA has no choice but to allow Kenny’s conviction to be vacated, and the court officially releases Kenny after 18 years in prison.

The movie ends with Kenny reunited with his daughter.  Title cards revealed that Betty Ann won a civil settlement against the city of Ayer for Kenny’s wrongful conviction, Officer Taylor couldn’t be charged for fabricating evidence against Kenny because the statute of limitations had expired, and Katharina Brow’s real killer has never been found. 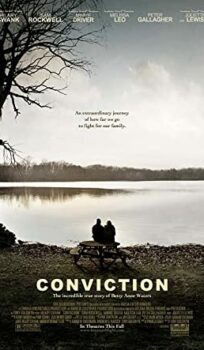