Rubber Duck (Kris Kristofferson) and Melissa (Ali MacGraw) are separated from the Convoy approaching a bridge over a river into Mexico. Dirty Lyle (Ernest Borgnine) has an Army unit and tank block the bridge but Duck decides to play big shot, orders Melissa out of the truck and try running the blockade. He runs full speed over the bridge, dogging a machine gun and Army jeeps but a single cop shoots his tanker of explosives, explodes and goes off the side of the bridge into the river. Everyone believes he’s dead. A funeral for him takes place in a stadium full of trucks and a eulogy is given by the Governor. But his touching words actually proves he will use them to reach the Presidency. Melissa is reunited with an injured by living Rubber Duck which Dirty Lyle catches a glimpse in the back of a bus which is joining the Convoy, reformed, and returning to the highway. 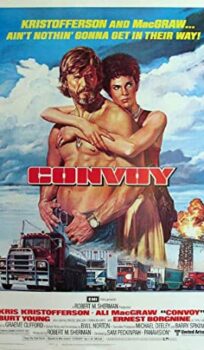