Luke (Paul Newman) escapes yet again, taking Dragline (George Kennedy) with him. Once again, the guards and dogs catch up to the two fugitives, and Luke resigns himself to being recaptured. The Captain (Strother Martin) has had enough of Luke’s rebellious spirit, and has him shot without warning. Dragline carries Luke out, and the two are taken into custody. A deputy offers to drive Luke to the local clinic to be treated, but the Captain insists that he’ll be taken on the hour-long drive to the prison infirmary, even though it’s sure that he’ll die on the way. The movie ends with Dragline telling the other chain gang prisoners about how Luke went out smiling. 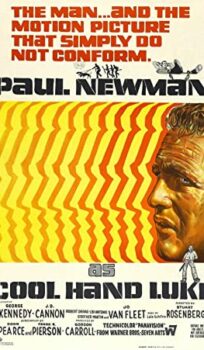