Holli (Kim Basinger) has sex with Jack (Gabriel Byrne) and turns into a noid, and then they leave Cool World for Las Vegas in the real world. Unfortunately, the barrier between the worlds has now been damaged, and Jack and Holli start to change into clown-like doodles. Frank (Brad Pitt), who learned of their sexual tryst and how Holli seemingly killed his partner Nails as she left Cool World by sucking him into a pen, goes after them.

To try to become a noid for good, Holli decides to find and touch the Golden Spike of Power, a device whose purpose is to maintain the barrier between the worlds. She ditches Jack when he refuses to take her to it. Jack returns to his home to find Frank there, and they – along with Jack’s neighbor Jennifer (Michele Abrams) – go after Holli. They find her outside of the Spike’s location – the Plaza Hotel & Casino – hurting Dr. Whiskers, who was trying to stop her, and Frank pursues her almost to the top. He dies when she, in doodle form, pushes him off of a ledge and he falls to his death.

Holli touches the Spike, but it turns her into a doodle again and causes many evil doodles to enter the real world and start wreaking havoc. Jack comes up and touches the Spike and turns into a superhero doodle, and though Holli tries to escape with the Spike, he gets it from her and puts it back in its place, restoring the real world back to normal and sending him, Holli, and all of the evil doodles back to Cool World.

Soon after, the still-living Nails comes out of Holli’s pen, and he and Dr. Whiskers take Frank’s body back to Cool World. Frank’s love interest Lonette is initially grief-struck, but after she learns from Nails that Holli killed him while she was a doodle, she realizes that because he died by a doodle’s hands, he’ll be reborn as a doodle. He is reborn soon after, and he and Lonette finally begin to pursue an intimate relationship. Jack, stuck in the Cool World seemingly forever, makes plans to marry Holli, much to her dismay. 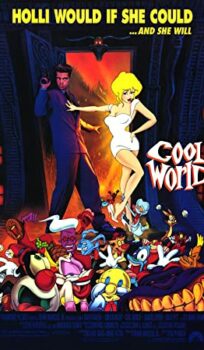