Both General Titus (Dragan Micanovic) and Senator Meneius (Brian Cox) fail at their attempts to dissuade Caius Martius “Coriolanus” (Ralph Fiennes) from exerting his vengeful attack on Rome with the help of Aufidius (Gerard Butler) and his Volscian Army.  Meneius commits suicide.

But then, Senator Sicinius (James Nesbitt) has the idea of bringing forward to Coriolanus his mother Volumnia (Vanessa Redgrave), his wife Virgilia (Jessica Chastain) and their young son Martius (Harry Fenn), along with the housemaid, to talk some sense into him.  Very effectively, Volumnia cries her way -with some intense words- into Coriolanus’s reason and gets Virgilia, the boy and the maid to kneel -along with herself- and plea for mercy.  This seems to deter Coriolanus and, at the despondent look of Aufidius and his men, he announces that he won’t destroy Rome and there will be peace between the two territories, which is officially signed shortly after.

Back in the Volscian border, Aufidius discuses with his men how Coriolanus’s act of betrayal can only be punishable by death.  Coriolanus arrives and claims to be a servant at Aufidius’s disposition; however, Aufidius disowns him, brands him a traitor who “succumbed easily to hypocritical female tears”, refuses to further acknowledge him by the “stolen name” of Coriolanus -to Coriolanus’s rage and dismay- and orders him to be immediately killed.

Coriolanus finds himself engaged in a knife battle with several of Aufidius’s men.  He manages to kill a couple of them, but they overpower him and stab him several times.  While he is mortally wounded, Aufidius approaches him and -in a move that could resemble the tragedy of Julius Caesar- hugs him close to himself and gives him the final blow in the chest, killing him.

The final scene has Aufidius and the Volscian soldiers quietly contemplating what has happened, and Coriolanus’s body tossed on the back of a vehicle, his fate unsaid. 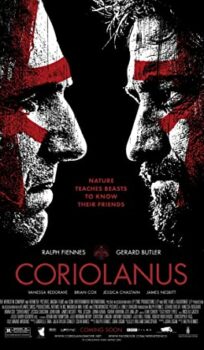