This movie takes place between episodes 22 and 23 of the original series, even though the movie came out well after the last episode.

The beginning of the investigation takes place, but roughly 45 minutes into the movie, when Spike and Jet are talking on the shore of one of the Mars rivers, Jet asks Spike if this is one of the cases they should take, or if they should let it go. Spike has fallen asleep – and he never actually wakes up before the movie continues on.

Vincent blows up the bombs holding the nanomachines that will kill everyone. However, not all is lost – before he is able to, Jet is able to rent several WWII planes to drop the antidote on the crowd. Faye is able to break into a Climate Control Center, and makes it rain over the parade. The antidote is spread before anyone gets infected. The Bebop crew manage to stop Vincent, but he dies, meaning the 300,000,000 Wulong bounty on his head is null and void. As usual, the Bebop crew has done everything they can and helped all they could, but they don’t get their reward.

After the credits, Spike wakes up on the couch inside the Bebop. He reaches up and grabs one of the butterflies the infected people see, but when he opens his hand it’s gone. It’s never outright said, but it is implied that everything after the scene where Spike was asleep on the shore was all a dream. 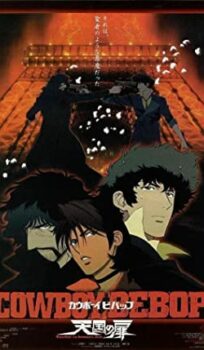