Short Version:
Doc Miles kidnaps Poon Dong and gets Chev’s heart back, while Chev kills the third Verona brother. Chev is killed when he grabs hold of an electricity transformer which is so hot it lights him on fire. Chev is pronounced dead by Doc Miles. However, once they get his heart back in him and leave the room… Chev blinks.

Long version:
Chev (Jason Statham) is kidnapped immediately after hitting the ground by the Chinese mafia. They cut his heart out and put it in a box to transfer it to Poon Dong (David Carradine), who’s heart is failing. They give Chev a fake heart to keep him alive long enough to harvest his other organs, but Chev inadvertently wakes up before they can. He can only go for an hour before needing a recharge.

Chev is under the impression that it is Johnny Vang with his heart, and chases after him through the city. Doc Miles tells him that if he gets the heart, they can put it back in. He eventually finds him in a strip club, where Eve (Amy Smart) is now working, and he finds out that not only has it actually been three months, not a day, since he fell out of the helicopter, but that the message he left to Eve was completely ruined thanks to the wind.

Chev interrogates a gangster he wounds in a shoot out in the strip club, and finds out that El Huron is chasing him as well as the Mexican mafia.

Outside, Chev is beat by police officers, but one of them shocks him with a stun gun which wakes him back up, allowing him to fight off all the police. He takes Eve and another stripper and steals a cop car. The other stripper tells Chev that Johnny Vang is probably at the horse race track.

Chev is again cornered by the cops, but a new friend, Venus, picks him up. He’s Kaylo’s brother, and wants revenge on the men that killed his brother, but Chev has already killed them all in the first movie. Venus turns to leave, but Chev lies and tells Venus that El Huron was involved, and Venus agrees to help.

However, Venus has Full Body Tourette’s Syndrome, meaning he can jerk violently and go into what seem like seizures at any moment.

Chev makes it to the race track, but is low on power, and starts rubbing up against people, trying to use friction to charge himself. However, Eve shows up in the nick of time and has sex with him on the race track, which gives him plenty of friction and electricity to continue. He gets up and chases after Johnny Vang after seeing him in the crowd. Vang escapes, and Don Kim, the Chinese gangster that saved Chev in the first movie, picks him up and saves him from the police.

Don tells Chev that one of the Triad leaders, Poon Dong, was in need of a heart transplant, and that’s where his heart is. Don then tells Chev that there is a reward if someone is able to return him to the Triads so they can get the rest of his organs. In defense, Chev kills everyone in the limo, including Don Kim. Chev steals another car. Venus calls Orlando and the gay biker gang for help.

Chev eventually chases Johnny Vang down where he can’t run, and makes it into a large outdoor power storage plant, which is precisely the place Chev can get all the energy he needs in his current condition. He gets the box from Johnny, forces him to open it… but there is no heart. Chev quips that “carrying something like this around is just fucking disturbing”, but never shows what’s in the box.

Chev calls Doc Miles (Dwight Yoakam), who explains that Poon Dong already has his heart and that if he had just stayed on the phone he could have told him. Chev goes to interrogate Johnny more, but is shot by Chico, one of the Mexican mafia gangsters, and clubs Chev over the head and knocks him out.

Chev has a flash back to when he was a child on a talk show. The series finally reveals a little about Chev’s past – he was a troubled boy who was constantly stealing things and beating people up as a child in Europe because his father died. During this time, Doc Miles uses one of his hookers to lure Poon Dong to his house, where Doc injects Poon with something and knocks him out.

Chev wakes up when the gangsters start stun-gunning his testicles, and is dragged by speedboat to an island where El Huron is. Chev learns that El Huron is actually the third Verona brother, which he didn’t know even existed. Ricky Verona is being kept alive by a complex machine that keeps only his head alive long enough to see Chev die. However, Orlando, Venus and Ria show up, each with their own respective gang members, and a huge shoot out begins.

Chev smashes open Ricky’s tank and kicks the still living head into the pool. His electricity starts to run out, so he climbs an electricity pole and shoves his hands into the transformer. This lights him on fire, but gives him the electricity needed to beat El Huron to death. Still on fire, his face beginning to melt, Chev turns to the camera, breaks the fourth wall, and gives the audience the middle finger while screaming.

After the credits, there is a scene where Doc Miles replaces Chev’s heart with the real one, but Chev is obviously very badly burned and covered in bandages. They shock him with the paddles to try and get his heart started, but it’s no use. Chev is dead.

However, once everyone leaves the room… Chev blinks. 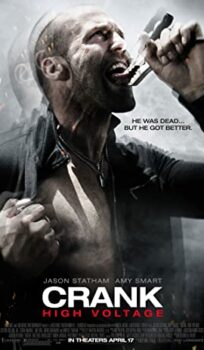