James Spader is a film producer with a detached marriage who survives a head-on car crash with Holly Hunter.  They begin a deviant affair, fueled by their new found obsession for car crashes.  They become involved with others like themselves, and find a leader in Elias Koteas who stages recreations of famous car crashes.  After Koteas dies in a car crash, Spader and his wife (Deborah Unger) stage a car crash of their own.

They both survive, and while they are tenderly embracing Spader says “maybe the next one”. 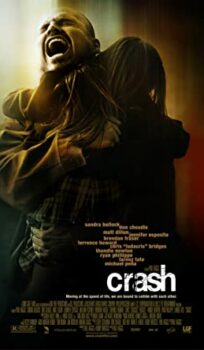