After narrowly escaping death at the jaws of the alligators more than once (though Dave loses his right arm to one of them) and even managing to kill a few of them, Haley and Dave – along with their dog Sugar – get onto the roof of their house, where Haley uses a flare to signal for a nearby rescue helicopter to come get them. Dave watches Haley proudly as the chopper spots them and starts lowering a heli-basket for them to get into.

After a rescue attempt by Wayne (Ross Anderson) and his police partner Pete (Jose Palma) to save Haley (Kaya Scodelario) and Dave (Barry Pepper) ends with Wayne getting eaten by one of the two alligators in the crawlspace and Pete getting ripped apart by four alligators lurking in the flooded street, Dave comes up with a last-ditch plan for Haley to escape the crawlspace before it completely floods: He will bang on the pipes so the sound will lure the two alligators away from the stairs leading up to the garage, which will enable her to reach them. Haley promises to come back for him, and after Dave starts striking the pipes with a brick, Haley begins her swim. One of the alligators moves towards Dave’s location, and when it gets close enough to him, he knocks a nearby house jack loose, bringing a beam down onto the reptile and trapping it. He then kills it with a shovel.

Haley botches her part of the plan when she makes noise, bringing the other alligator back to the stairs, so she yells out to her father that she is going to take a far riskier escape route: The overflow drain pipe connected to the lake that the gators used to come in. At the drainpipe’s entrance, she finds Wayne’s body floating there along with a nest with eggs, and one of the outdoor alligators then comes inside, but it ignores her. Haley spots Wayne’s holstered handgun and manages to get a hold of it, but suddenly, the alligator that came in springs out of the water and gets the hand holding the gun – as well as the arm – down its throat. Thankfully, before it can bite it all off, she empties the gun into it and kills it. She then swims out through the drainpipe, avoids another alligator, breaks into the house, and uses a crowbar to bust open the floorboards above Dave and pull him out just as he is a hair away from drowning.

With the streets now submerged in waist-deep water and their vehicles thus useless for escaping with, Dave sees the motorboat over at the nearby gas station that a trio of looters was earlier using (and who also got killed by the gators) and points it out to Haley. After she, in turn, points out that a bunch of gators are swimming between them and that boat and they ought to stay here, Dave informs her that the levees are going to break soon and they can’t be here for that, so that boat is their only chance to leave, plus they should be able to reach it without trouble considering the rain will cover any noise they make so long as they don’t do any splashing since gators hunt what splashes. Dave picks up their dog Sugar (who remained safely up on the first floor of the house this whole time) and they begin to slowly walk out to the boat, but unfortunately, they are forced to stop when the eye of the hurricane passes over them and puts a pause on the rainfall, and a warning siren then blares moments later to signify that the levees have broken. Dave tells Haley to swim for the boat because she is faster than the alligators, so she does just that, and she climbs into it just as a trio of alligators are about to get her. However, just as she collects her father and Sugar, torrents of water come rushing in and send them all crashing back into the house, overturning the boat and flooding the entire first floor. The trio also get separated, with Sugar going down one hallway and Dave going down another, and Haley getting sent into the kitchen.

Dave soon shouts for Haley to meet him at the stairs leading to the second floor, and as she very cautiously makes her way around the kitchen and into the living room, she hears a walkie-talkie transmitting voices and notices Pete’s discarded one floating amongst some debris. She gets a hold of it and tells the authorities on the other end that she and her father need help and gives them their location, after which the signal cuts out. Meanwhile, Dave gets to the stairs and takes out a bunch of flares and lights one up, then spots Sugar swimming up the hallway and gets her to come over to him. However, an alligator surprises him from behind and clamps its jaws down on his flare-holding arm, and shortly afterward, it tears his arm off at the elbow. Haley then appears, and her father orders her to flee just as the alligator starts moving towards her. Haley ends up trapping it in the bathroom’s walk-in shower and then helps her father up the stairs towards the attic with Sugar following them.

Haley then sees a rescue helicopter’s searchlight peeking through a window in one of the bedrooms, so she goes into it and lights up a flare of her own in order to show it out the window in the hope that the pilot will see it. However, thanks to the floodwaters having already risen up to the window, another alligator breaks in through it and floods the place, and the force of the water shuts the door tight. Haley tells Dave to head for the roof (with Sugar), saying that she has another way out, but soon after, the alligator bites down on Haley’s left shoulder and chest and takes her underwater. As it subjects her to a death roll, Haley musters up all of her inner strength to grab the still-lit flare off the floor and then stick it in the gator’s skin below its jaw, making it relinquish its grip. She then swims out the window, and the alligator makes one last unsuccessful attempt to chomp down on her before it gets swept away by the water current. Dave then appears and uses his one arm to pull Haley up onto the roof before she can be taken away as well.

Dave points out to Haley that the rescue chopper is still flying nearby, so she lights up another flare and waves it around to get the chopper’s attention. She succeeds, and as the chopper starts to lower a heli-basket for her, Dave, and Sugar to get into, Dave watches her proudly. 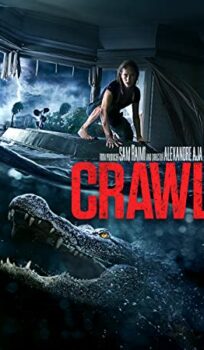