Eri (Mie Kitahara) is married to an American. Having married too young, Eri craves the passion she missed out on before her marriage. She is most drawn to Haruji (Masahiko Tsugawa) due to his innocence and truly begins to fall for him. However, Haruji’s brother, Natsuhisa (Yujiro Ishihara) discovers her secret, and uses it to his advantage to begin an affair with her as well.

In the climax of the film, a heartbroken Haruji, discovering his brother on a sailboat with Eri, the girl he loved, proceeds to suffer a psychotic break. Haruji kills Eri by running her over in the water with his boat, and then crashes into the sailboat his brother is on, killing him too. The film ends with Haruji speeding off with a stoic, emotionless look on his face. 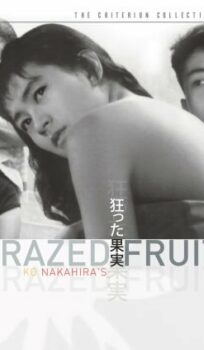