Chinese-American economics professor Rachel Chu (Constance Wu) flies to Singapore with her boyfriend Nick Young (Henry Golding) for the wedding of Nick’s best friend Colin. To Rachel’s surprise, Nick and his family are extremely wealthy (or, crazy rich) real estate developers. Most of Nick’s family and friends, especially his mother Eleanor (Michelle Yeoh), look down upon Rachel for not coming from money like them and believe she is a gold digger. However, she befriend’s Nick’s cousin Astrid (Gemma Chan), whose husband Michael also didn’t come from money, but he is having an affair that Astrid finds out about.

After Colin and his fiancee Araminta get married, Eleanor reveals to Nick that she hired a private investigator to look into Rachel’s past. Rachel had told Eleanor that her father died before she was born, but he is, in fact, alive, and that Rachel’s mother cheated on her original husband with Rachel’s biological father. Hurt, Rachel leaves and goes to the home of her old roommate Peik Lin (Awkwafina). There, Rachel’s mom Kerry shows up to tell Rachel the truth about her father. Her husband abused her, and she took comfort with a school friend that would later become Rachel’s father, and Kerry fled to America for fear that her husband would hurt them if he found out.

Nick tries to propose to Rachel, but she declines because she doesn’t want to be the reason that his family cuts him off. Before leaving, she meets with Eleanor to tell her that she turned down Nick’s proposal, but reminds her that Nick will probably resent her for the rest of his life for making him leave Rachel.

Rachel and Kerry prepare to go home, but Nick catches up to her on the plane and tells her he would give up his fortune just to be with her. He proposes once again, and Rachel accepts this time. He later throws a huge engagement party with all his friends and family, and Eleanor looks upon Rachel more approvingly. 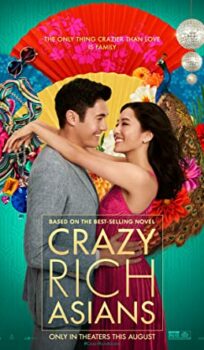