Dr. Harry Wolper (Peter O’Toole) is a university research biologist who is attempting to clone his late wife.  With the help of his grad assistant Boris (Vincent Spano), Harry is able to convince local waitress Meli (Mariel Hemingway) to donate her eggs for the project.  The 19-year-old Meli is attracted to the 60-something-year-old Harry, but he is only interested in bringing his late wife back to life.  Meanwhile, Boris is starting a relationship with fellow grad assistant Barbara (Virginia Madsen), and Harry sees their relationship mirroring his relationship to his wife.

Following a pregnancy scare, Barbara falls into a coma, and her parents want to turn off her life support.  Boris, with Harry’s help, convinces them to wait a few days so he can try to get her to wake up.  Harry sees Boris’ devotion to Barbara as identical to the same devotion he had to his wife, as well as Meli’s devotion to him.  Realizing that, even if he is successful in cloning his wife, she won’t be the same person he originally fell in love with, Harry abandons his cloning plans and begins a relationship with Meli.  That same day, Barbara wakes up from her coma, and later tells Boris that she heard everything he told her the past couple of days.  At the end, Meli agrees to marry Harry, and Boris and Barbara appear to also be heading towards marriage.  Meli then tells Harry she is pregnant, and Harry will finally get to be a father. 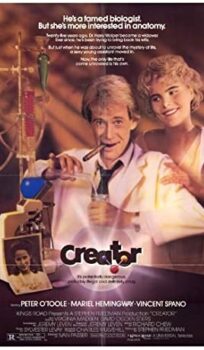