Rives (John David Carson) and Pahoo (Dennis Fimple) eventually meet with local hunter and fisherman Joe Canton (Jack Elam) – who claims to have encountered the Bigfoot-like creature more than once – at his home, and they ask him to tell them more about the encounter he had with the creature some time ago that ended with his best friend getting killed by it. Canton replies by telling them a story about when he believes he first encountered the beast in an area deep in the swamplands, and once he is finished, Rives asks him if he can tell him and Pahoo how to get out to that same area. Canton gives them directions, and after the duo say their goodbyes to him, Pahoo privately lets Rives know that he is more than a little reluctant about going out to look for this area. Rives responds to this by telling him that they have already come this far and they can’t just quit now, so Pahoo decides to put his doubts aside and make the journey with him.

Rives and Pahoo drive their van into a very remote spot in the swamplands and set up camp, but as they are eating dinner that night, Rives tells Pahoo that, while he is not completely sure about this, he believes that there is something out there circling their camp right now. They take a rifle and a flashlight and go out and investigate, and moments later, they find some large footprints in the ground, confirming Rives’ suspicions. Pahoo then tries to ready the rifle for a possible up-close encounter with the beast, but he discovers that there are no bullets in it, and Rives admits that he didn’t load it because he was hoping that they wouldn’t have to use any bullets tonight. Pahoo hands him the rifle and forces him to return to the van to load it, but while he is gone, the creature suddenly attacks Pahoo, knocks him out, and drags him away. It then tears the campsite apart before disappearing again.

Rives – having heard the creature’s roars and Pahoo’s screams – returns to the campsite and sees what has become of it, and after seeing that Pahoo has vanished and then finding traces of his blood on the ground, he goes back to the van to call for help over the radio. When Sheriff Carter (Bill Thurman) answers the call, he gives him directions to his location, and Carter tells him that he is on his way. Just then, the creature attacks Rives from outside the van, and it ends up using its strength to flip the van down a hill while Rives is still in it. Despite sustaining some injuries, Rives manages to crawl out of the wreck and fire a bullet at the creature, wounding it. He then flees into the wilderness just as sparks from an exposed wire ignites some leaking gasoline and blows up the van.

When Rives stops in another part of the woods, he hears some strange sounds nearby, and thinking that the creature is catching up to him, he takes out his knife and challenges the beast to come and get him. He then hides behind a tree when he hears footsteps approaching from the brush behind him and makes ready to stab the beast, but when he makes his move, he accidentally drives his knife into the stomach of Pahoo, who had recovered from the creature’s attack and managed to find him. After noticing that Pahoo is still alive, Rives picks him up and carries him away to try to find help. While this goes on, Carter pays a visit to Canton’s house in order to talk to him about Rives and Pahoo, and after finding out (off-screen) that Canton had told the duo all about where he first encountered the creature and gave them directions to it, Carter forces him to come along with him on his search for them. In the morning, Carter and Canton find Rives and Pahoo on a dirt road just off the main road, and they take the guys to the hospital to get them treated for their injuries.

After talking to Rives in the waiting room and assuring him that what he did to Pahoo was just an accident, Canton storms out of the hospital intending to get his shotgun, go right into the swamps, and kill the creature himself. Rives then pays a visit to the supposedly comatose Pahoo in his room and tearfully encourages him to pull through, telling him that they still have a lot of things to see and do, but Pahoo reveals that he is faking his unconsciousness. He tells Rives that he is a little mad right now – but only because they have to start their project on the creature all over again, and he assures Rives that they will find it. 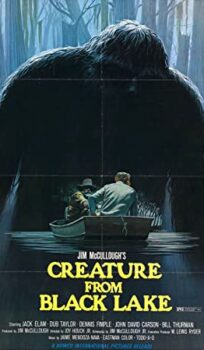