Father’s Day:  Nathan Grantham (Jon Lormer) returns from the grave to claim his Father’s Day cake.  After strangling his daughter Bedelia (Vevica Landfors) and housekeeper, Mrs. Danvers (Nan Mogg), crushing his great-grandson-in-law, Hank (Ed Harris) with his own tombstone, and twisting the head off of his niece, Sylvia (Carrie Nye); he places Sylvia’s head on a tray, covers the top with frosting and candles.  Grantham’s two great-grandchildren, Richard (Warner Shook) and Cass (Elizabeth Regan) then have the misfortune of crossing paths with him, holding their dear aunt’s head on a platter.

The Lonesome Death of Jordy Verrill:  The contents of the meteor create some sort of fast spreading fungus that will cover anything it touches.  In the case of poor Jordy Verrill (Stephen King), it covers him too.  Unable to stop it from spreading, he puts a shotgun to his fungus-covered head and kills himself.

Something to Tide You Over:  Lovers Harry Wentworth (Ted Danson) and Becky Vickers (Gaylen Ross) are murdered by Becky’s jealous husband, Richard (Leslie Nielsen).  Burying them up to their necks in sand along the shore, Richard leaves them both to drown.  After the deed is done, Richard goes along with his normal routines only to be stalked by the seaweed-covered zombies of Harry and Becky.  Unable to escape them, Richard passes out, and later finds that he as well has been buried up to his neck along the shoreline, and his victims have returned to the sea, leaving him there to face the same fate they had.

The Crate:  Choosing to believe his delirious friend Dexter’s (Fritz Weaver) story about a man-eating creature that had devoured Mike the janitor (Don Keefer) and Charlie Gereson (Richard Harper), Henry (Hal Holbrook) believes that he has finally found a way that he can be rid of his horrible wife, Wilma (Adrienne Barbeau).  Leaving a note with an extensive excuse to lure her to the lab where the creature was, Henry decides to clean up everything left behind by the creature.  Finding only puddles of blood smeared all over the laboratory floor and a bloodstained crate (where the creature was found) pushed underneath the stairwell, he assumes the whole story is infact true.  When Wilma finally shows up, he tries to push her up to the crate, with hopes the creature will leap out and eat her.  There is no such luck at first.  Just as Henry assumes that Dexter just made the whole story up, the creature reaches out of the crate and eats Wilma.  Then, carefully chaining the crate up, he loads it into the back of his car and dumps the crate into a large quarry.  However, as soon as you believe that all is safe now, and everyone is happy, the creature manages to break free of the crate.

They’re Creeping Up On You:  Germaphobe, Upson Pratt (E.G. Marshall) is suddenly swarmed by a large hoard of cockroaches (what he fears the most).  Fleeing from the bugs, he locks himself in his germ-free bubble.  Just when he thinks that he’s safe he pulls the blanket off his bed to find yet another swarm of cockroaches.  Pratt cowers in fear and dies of a heart attack.  When the building superintendent, White (David Yearly) returns to the apartment all the cockroaches are gone, and the only thing out of place is Pratt’s body sprawled out in bubble.  No sooner than we see his body, the roaches begin pouring out of his mouth. 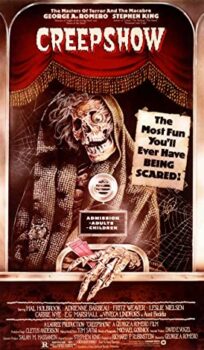