SHORT VERSION:
Mick and Sue figure out that Silvergate Pictures’ owner Arnan Rothman and his international vice-president Milos Drubnik have been using the studio as a front for an art smuggling operation, and they recently got possession of what was possibly Eastern Europe’s finest collection of paintings from the old art masters. The paintings were originally kept in the National Art Museum of Serbia, and they were thought to have been destroyed when the museum was bombed during the Yugoslav Wars. However, it turns out that the bombing was staged; the paintings had already been removed from the place by Rothman’s and Drubnik’s men. While Silvergate was shooting some of its newest movie in Yugoslavia, the paintings were used as props and just believed to be copies of the works, and they were shipped to Los Angeles when filming continued there. The set where the paintings are to be used is scheduled to be burned down, but by the time that happens, Rothman and Drubnik will have already switched the paintings out with actual fakes, so the destruction of them would cause anyone trying to investigate their authenticity to hit a dead end. Rothman and Drubnik also had Tom Zetland set up to be killed in a car accident because he was investigating them and was getting too close to the truth, and they also had his place broken into and cleaned out in order to get rid of any evidence against them that he accumulated.

With a little help from his friend Jacko in the ultimate confrontation, Mick defeats Rothman, Drubnik, and their men and gets them arrested, and the art collection is taken into protective custody by the police. Mick, Sue, Mikey, and Jacko return to Walkabout Creek, and Mick finally marries Sue. Jacko is in attendance with Mikey’s Los Angeles schoolteacher Dorothy, whom he is now going steady with. When Sue throws the bouquet, it gets caught by the troublesome crocodile that Mick and Jacko had failed to catch at the start of the film, and the movie ends with Mick and Jacko walking over to the reptile to deal with it.

LONG VERSION:
After Sue (Linda Kozlowski) mentions to Mick (Paul Hogan) that Silvergate Pictures is an elaborate front for something but she can’t figure out what, Mick suggests that they are engaging in smuggling, and it is likely either drugs or guns. He then says that he will get himself a job at Silvergate using one of the contacts he made at a press and industry meet-and-greet party that the studio held, so that way he can act as her mole and find out what is going on there. To solve the problem of having someone be around to look after their son Mikey (Serge Cockburn), Mick has his friend Jacko (Alec Wilson) flown up to Los Angeles to serve as his “nanny”. Jacko soon finds himself developing a mutual attraction with Mikey’s teacher Dorothy (Kaitlin Hopkins).

After getting cast in Silvergate’s Lethal Agent III movie as an extra, Mick’s extensive experience with animals ultimately lands him the job of handler for the picture’s star chimpanzee. One day, he notices some rather suspicious-looking men led by Milos Drubnik (Jonathan Banks) – Silvergate’s international vice-president who handles the company’s Eastern European activities – bringing a bunch of paintings onto Lethal Agent III’s museum set, then sees Drubnik lashing out at two men who bump the frame of one of the paintings. Mick soon gets to talking with Phil (Kenneth Ransom), an employee on the movie whom he has become acquainted with, who is having trouble making the museum set look like the one that was shot on location in Yugoslavia. Mick finds out from him that the paintings were all made in Yugoslavia and are copies of actual works, and Phil finds it odd that they were made over there and not in the U.S. because, in the U.S., they would’ve been cheaper to make and more realistic. Mick soon comes to believe that heroin has been molded with plaster and made into the tacky frames the paintings are in, having heard somewhere that that can be done and also remembering Drubnik’s earlier outburst. He therefore cuts a small piece off one of the frames with his knife and has Sue send it to a police laboratory for testing, but unfortunately, the tests results reveal that the frames are only plaster, ruling out drugs. Mick is undeterred, though, convinced that smuggling of some nature is going on at Silvergate.

The next day, he begins to think that the paintings themselves are what is being smuggled, so he takes a few of the Polaroid pictures of the paintings that Phil had been using to help reconstruct the set correctly, and he and Sue pay a visit to the Los Angeles County Museum of Art to show the photos to the curator. The curator informs them that, since he saw these paintings today, that means that they are fakes because the original works no longer exist; when Belgrade was bombed by N.A.T.O. during the Yugoslav Wars, the National Art Museum of Serbia took a direct hit and burned to the ground, along with the original paintings, which was regarded as possibly the finest collection of the old art masters in Eastern Europe. After Mick gets confirmation from him that Belgrade is in Yugoslavia, he tells the curator that these fake paintings came from there, and Sue suggests that maybe the bombing was not accidental; maybe someone removed the paintings from the museum first and then bombed the place to give people the impression that they were all destroyed in the blast, so that way they could have the paintings all to themselves as “spoils of war”. Very intrigued at this possibility, the curator asks Mick if he can take him to the paintings so he can get a good look at them. Mick informs him that that is probably impossible, but he might be able to get one of them and bring it to him for him to examine, and if he finds out that it is real, then the rest would have to be as well. The curator tells him to call him the minute he gets his hands on one.

That night, Mick and Sue go back to the Paramount Pictures lot where Silvergate is shooting their movie at, and Mick breaks in and tells Sue to wait in the car while he goes inside the soundstage housing the museum set. He goes up on the walkways above the set and sees Silvergate’s owner Arnan Rothman (Jere Burns), Drubnik, and their thugs switching out the real paintings in the frames with actual copies, and he overhears Rothman remark to Drubnik that they smuggled the real paintings into this country as film props, and since the copies are scheduled to be burned on the set the next day, anyone who wants to see them to check their authenticity will believe that they lost an opportunity to do so and his and Drubnik’s tracks will be covered. Mick sneaks down to the floor and attempts to make off with one of the unswitched paintings, but he is quickly discovered and finds himself getting chased around the lot by Rothman’s and Drubnik’s henchmen (though he is able to stash the painting he took so he can recover it later). Around this time, Jacko greets Sue, having followed Mick here with help from Dorothy, who is now looking after Mikey back at Mick’s and Sue’s place.

Mick manages to outwit and subdue each thug he faces (with some help from Jacko, who enters the lot to assist him) until only the top goon, Carl (Peter Kent), is left. He eventually runs onto the African jungle set, which only has one way in and out, and Carl sees him go in and reports it to Rothman and Drubnik over his walkie-talkie. Rothman eventually enters and tells Mick to come out so he can join his friends, after which Drubnik and Carl come in behind him with a captured Sue and Jacko. Mick emerges from hiding after Drubnik threatens to shoot Sue, but he has his arms raised and his hands in the position he uses when he wants to subdue a wild and/or vicious animal, and he tells the antagonists to not make any sudden moves. Rothman tells him he can lower his hands, but Mick only lowers his right one, informing Rothman that he can’t really lower the other or break eye contact in the direction he is currently looking in because the “fella” who lives in the big empty cage nearby will come down here and tear him apart. Jacko soon gets the villains to focus their attention on the cave that Mick is looking at, and the studio’s lion, Virgil, appears. Mick tells Rothman and company not to shoot Virgil because their bullets won’t be sufficient enough to kill him, plus the lion will go berserk if he smells blood, then tells them to back up slowly into the cage. Everyone does so except for Drubnik, who tells Mick that he will shoot him and leave him for the lion. However, Mick reveals that, when he lowered his right arm, he stopped keeping the more vicious lioness at bay, and she then shows up. Mick tells Drubnik that he is getting into the cage before the lioness’ mother gets here, after which said lioness appears. After Mick closes the door, the frightened Drubnik orders him to open it, so Mick tells him to hand over his gun, giving him the chance to press Drubnik up against the cage and disarm him while also giving Jacko the opportunity to knock out Carl. After giving Drubnik a good scare by almost having Virgil bite him, he lets Drubnik into the cage and sends him face-first into the back wall, rendering him unconscious. Mick makes ready to slug Rothman, but Rothman tells him that he will sue him for every cent he has if he lays a hand on him. Jacko tells Rothman that that sounds fair, then knocks him out with one hit and tosses $40 in his pocket onto him.

Mick asks Sue what she is doing here, and she replies that her cell phone went dead and she came onto the lot to find a phone to call 911 with. After having Jacko cover his ears and turn around to keep an eye on the bad guys, Mick admits to Sue that he was really scared for the first time in his life when he saw Drubnik put his gun to her head, and he realized then and there just how much he loved her. He then asks her to marry him, and off-screen, she says “yes”. In a news report later that night, we find out that the police have taken the paintings into protective custody and Sue has been credited for leading detectives to the cache of masterpieces, but Mick (referred to as an “undercover agent”) declined to be interviewed on camera despite capturing the thieves, undoubtedly due to an earlier embarrassing news story centered on him and Mikey holding up a freeway to remove a skunk from it that got blown way out of proportion.

Mick, Sue, and Mikey return to Walkabout Creek, and Mick and Sue finally get married. Dorothy is also in attendance as Jacko’s girlfriend. However, when Sue throws the bouquet, it gets caught by the troublesome crocodile that Mick and Jacko failed to catch at the start of the film. The movie ends on a freeze frame of them walking over to the reptile to deal with it. 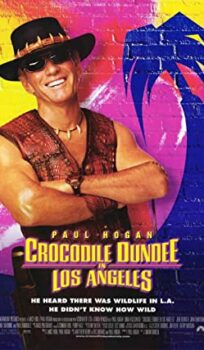