Rocky Mulloy (Dick Powell) is released after 5 years in jail, for a bank robbery he did not commit.  His friend Danny is still in jail for the robbery. Rocky sets out to find out who framed him.  Rocky is threatened and shot at, but does not back down.  He also meets up with his old girlfriend Nancy (Rhonda Fleming).

Rocky forces local gambler/ thug Castro (William Conrad) to reveal the truth.  Danny was actually in on the robbery, with Castro.  Danny was identified, but agreed to frame Rocky, to keep Castro out of jail.  Nancy was in on it, and is holding Danny’s half of the money from the robbery. Rocky realizes he has been betrayed by his friend and the girl that he thought loved him.  Rocky turns Castor and Nancy over to the police. 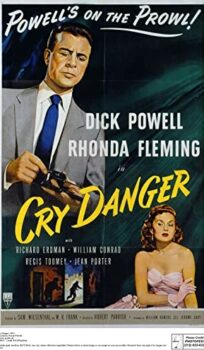