Short Version:
Wynn and Rains escape the cube. Wynn is captured by agents and is turned into the autistic man from the first movie as an experiment. Rains escapes and finds her daughter.

Long Version:
Wynn, upon seeing his coworker burnt to death for reaching the exit but not believing in God, decides to enter the cube to save the remaining people, Haskell and Rains. He enters and finds them and explains what’s happening to them. The Cube is used as both a punishment and an experiment (but what is being tested is never told). When people are arrested for crimes against the Government and are sentenced to death, they are given the choice between dying or entering the Cube. Their memory is wiped for the experiment, because if they knew what the goal was it would ruin the point.

Dodd, Wynn’s partner at work, sabotages the control room and prevents Jax from seeing what happens. He also sabotages the power, putting the cube into “reset mode”, which will set every room back to default position but also incinerate the contents of every single room after 10 minutes, killing all living things instantly. However, this also disables all the traps in the Cube. Wynn knows this, sets his watch for 10 minutes, and they start racing to the edge of the Cube.

During this time, Jax realizes Dodd is the one sabotaging everything and kills him.

Jax realises that Haskell used to be military, and in this country, all military personnel are equipped with a chip in their brain that allows total control over their body. He activates this chip and sets Haskell to kill both Wynn and Rains.

After being chased all around by Haskell, they make it to the last room, the one with the exit directly to the outside. The room is covered in spikes, which Rains impales Haskell on. Both Rains and Wynn escape, while Haskell is incinerated by the reset. They are chased by government agents that shoot tranquilizer darts. Wynn is hit by one and sacrifices himself to the guards to distract them from Rains, who is able to escape.

Wynn eventually wakes up in a hospital. Jax is there waiting. Jax explains that Wynn was convicted of many things including treason, and so he is being sentenced to “two lifetimes of punishment”. What that means is never revealed – perhaps they have the ability to clone people and make them relive the Cube over and over again.

The last scenes are the scenes from the original Cube where the survivors meet the autistic man. As part of the experiment and his punishment, Wynn was turned into the autistic man seen in Cube 1. 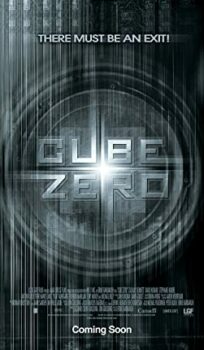