Pooper:
The cult is real.  Lisa can transform into a snake.  Lisa kills Nick, Carl, Rico and Pete.  Tom kills the cobra, which transforms back into Lisa.

Longer ending:
At the end or WWII, six American soldiers watch a snake charmer in an Asian bazaar.  He hears them discussing legends of a snake cult, that can transform people into snakes.  For enough money, he will take them to watch a cult ceremony.  At the ceremony, one soldier begins taking pictures.  The cult members attack them.  They escape, but Nick is injured.  That night, in the hospital, Nick is bitten by a cobra and dies.

The remaining five return to New York.  Tom (Marshall Thompson) hears screaming at night, and breaks into the apartment across from him.  He finds Lisa (Faith Domergue), who moved in that morning.  She claims a man was breaking in.  Tom and Lisa begin dating.  She takes great interest in learning the identities of the men in a photo from Asia.

Rico (David Janssen) is bitten by a cobra while driving, causing a fatal crash.  Carl is bitten and falls off a balcony to his death.  Paul (Richard Long) suspects Lisa.  He has noted that animals are terrified of her.  Paul is engaged to Julia, who dumped Tom for Paul, so it is hard for Paul to talk to Tom about it.  Pete is also suspicious of Lisa, since he saw her on the street right after Carl fell.  Pete confronts Lisa.  She transforms into a cobra and kills him. 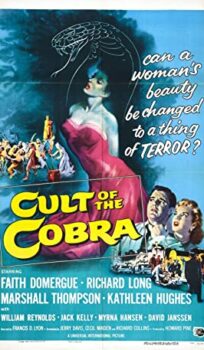