Short version:
Everyone dies except for the emperor and the empress

Long (and I mean LONG) Version:

All’s not well within the royal family of China, set in the 9th century.  The emperor (Chow Yun Fat) is secretly working with the imperial doctor to poison the empress (Gong Li)’s daily medicine, served by the doctor’s daughter, Chan (Li Man), in order to slowly incapacitate her.  Meanwhile, the empress is having an affair with the crown prince (Liu Ye), whose actual biological mother is dead.  The crown prince, meanwhile, is also having an affair with the Chan.  The empress, meanwhile, is also planning, without the knowledge of her own two sons with the emperor, Prince Jie (Jay Chou) and Prince Cheng (Qin Junjie), her own rebellion against the emperor.

The empress enlists the help of the imperial doctor’s wife (Chen Jin), and finds out that the emperor is slowly poisoning her.  It turns out that the doctor’s wife is actually the biological mother of the crown prince, the emperor’s 1st wife whom he secretly jailed when he was just an army officer so that he can woo the then-princess and become emperor.  The doctor’s wife is soon captured in the palace.   The emperor decides to send the imperial doctor, his wife, and Chan away to a governorship to cover things up.  The empress tells Prince Jie of her own poisoning and her own plans for the rebellion, and Prince Jie decides to take her mother’s side.

The emperor then orders the silencing of the imperial doctors’ family (which, of course, includes his own 1st wife) via his assassins.  The doctor’s wife and daughter escapes, with some help from the Empress’s forces, and Chan decides to ride back to the royal palace, with her mother trying to catch up.  The empress also decides to tell the crown prince of her plans, and he freaks out and tries to kill himself, but he was not successful.

It all goes down at the annual chrysanthemum festival.  Chan first shows up to confront the crown prince, then her mother shows up also, and, in front of the entire royal family (minus Prince Jie, who was given the responsibility of “guarding” the palace) reveals that Chan and the crown prince are actually half siblings.  Chan freaks out and runs off, only to be taken out by the emperor’s assassins.  Her mother soon meets the same fate.  As Prince Jie and his 10,000 soldiers approach the palace (all with chrysanthemum stitching as part of their golden armor) to stage the rebellion, Prince Cheng, who’s been in the background, but figured out everything, suddenly stabs and kills the crown prince, then demands to be given the crown.  He also has his own group of soldiers, but they are easily taken out by the emperor’s assassins.  The emperor proceeds to whip Prince Cheng to death.

At first, the battle outside the palace between Prince Jie’s soldiers and the emperor’s assassins seems to be in Prince Jie’s favor, but they are soon surrounded by the emperor’s own forces; it turns out that the crown prince told the emperor of the empress’ rebellion plans before his death, and the emperor is well prepared.  When the dust settles, (and the blood washed away), the emperor offers to forgive Prince Jie’s betrayal if he, from now on, personally serves the empress her “medicine”.  When it looks like he might just do it, he grabs a sword and kills himself.  The empress, now seeing the “medicine” dripped with her own son’s blood, finally snaps and throws away the medicine.

Whew!  While the cinematography is beautiful, and while it’s impressive that they squeezed this Shakespearean tragedy in just under 2 hours, it’s not exactly Zhang Yimou’s best work.  Also, don’t expect any extended martial arts scenes ala “Hero” or “House of Flying Daggers”; they are few and far between. 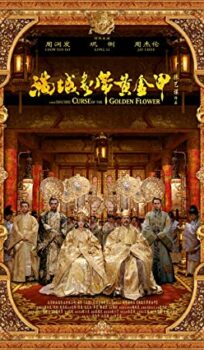