In this film that concludes the storyline began in Trail of the Pink Panther, Chief Inspector Dreyfuss (Herbert Lom) uses a powerful computer to pick the best candidate to find the missing Inspector Clouseau.  However, the night before the computer is supposed to pick the detective, Dreyfuss reprograms the computer so it actually picks the worst candidate, which turns out to be New York police officer Clifton Sleigh (Ted Wass) who turns out, to Dreyfuss’ dismay, to be worse than Clouseau ever was.

And in the end, after many assassination attempts on his life and meetings with various characters from previous Pink Panther films, Sir Charles Litton, his wife, Simone, and son George (David Niven, Capucine, and Robert Wagner reprising their roles from the original Pink Panther film) find Sleigh and take him to the Marcora islands where, through a parasailing accident / assassination attempt, ends up crashing into Countess Chandra’s Spa (one of the assassins who tried to kill him was employed by Chandra) where he meets Chandra and actor Roger Moore, who is speaking with a French accent and acting clumsily.

After showing a picture of Clouseau to Chandra, she tells Sleigh that she saw him several months earlier, but he was using the name Gino Rossi and asked her during their meeting if she knew where a good plastic surgeon was and she gave Clouseau the information.

Later in his meeting with Dreyfuss, Sleigh’s opinion was that Clouseau stole the Pink Panther diamond, took the alias Gino Rossi, got plastic surgery, and was later killed by a thief for the diamond, as a body found in the water was identified as Gino Rossi.  Dreyfuss then declares the case of Inspector Clouseau’s disappearance closed.

What actually happened was that Gino Rossi stole the Pink Panther diamond and tried to sell it to Chandra.  Clouseau interrupted the meeting between Rossi and Chandra and distracted Rossi, which gave Chandra enough time to kill him.  Clouseau and Chandra became partners, disposed of Rossi’s body in the ocean, and Clouseau got plastic surgery to look just like Roger Moore.

Meanwhile, after Sleigh left Chandra’s spa earlier, Chandra and Clouseau go to the safe to take a look at the Pink Panther and discover that it was stolen, with a single glove with a P on it, the calling card of the thief known as the Phantom, left in its place.  Later on Sir Charles Litton’s yacht, we find out that Sir Charles (The Phantom from the original Pink Panther film) did not steal the diamond but Simone did, presumably while Sleigh was having his discussion with Clouseau and Chandra. 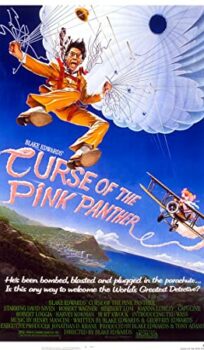