Gordon Bombay (Emilio Estevez) gives up his corporate image and returns to his old coach self. Charlie (Joshua Jackson) gives up his spot in the Goodwill Games tournament finals against Iceland to let Adam (Vincent Larusso), healed after an arm injury he sustained at the hands of an Iceland player in their previous encounter, play the game.

The Ducks/Team USA gets their butts whipped by Iceland in the first two periods, trailing by a 4-1 score, but after an inspirational pep talk and a change into the Anaheim Mighty Ducks uniforms, they enter the third period with a renewed sense of confidence and end the 3rd period tying the score 5-5. In the resulting shootout, the Ducks/Team USA lead with a score of 3-2, and in the final shot for Iceland, Bombay sends out Julie (Colombe Jacobsen-Derstine) to be the goalie, due to her fast glove and knowing that the Iceland team’s top player Gunnar Stahl (Scott Whyte) who was taking the final shot will go glove side with his shot. Gunnar shoots glove side, but Julie catches the puck, giving the Ducks/Team USA the victory.

As the Ducks celebrate, Iceland coach Wolf Stanssen (Carsten Norgaard) tells Gunnar he lost it for the team, and Gunnar says Wolf lost it for himself. The teams shake hands, and Gunnar commends Charlie for his work. The victorious Ducks head back to Minnesota, where during the credits they all sing “We Are The Champions” by Queen around a campfire. 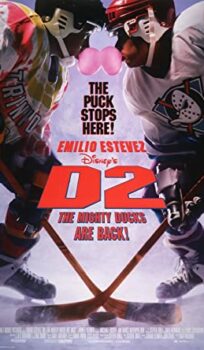