Charlie Tynan (Martin Sheen) receives a visit from elderly Mr. Drumm (William Hickey), his former employer. Drumm says that Da (Barnard Hughes), Charlie’s adoptive father, had some money and an heirloom that he wanted Charlie to receive after his death.

Charlie is confused, because Da was dirt poor and had no money or heirlooms, except… all the spending money that Charlie had given Da over the years and an ugly knickknack that Charlie hated!

Sure enough, it turns out that Da never spent any of the money Charlie gave him- he saved it all, so as to leave an inheritance for his son. And the heirloom, of course, is the ugly knickknack made from old pairs of eyeglasses.

Charlie is both deeply hurt and furious, knowing that his adoptive father never accepted a single gift from him and never allowed Charlie to express his love or gratitude. Charlie berates Da’s ghost, then leaves his father’s old house. He thinks he’s leaving his past and his Da’s ghost behind forever.

Hours later, when Charlie arrives back at his home in New York, he finds his Da’s ghost napping in Charlie’s study. Charlie smiles softly, knowing and accepting now that he’s never going to be able to leave the “ghosts” of his past fully behind. 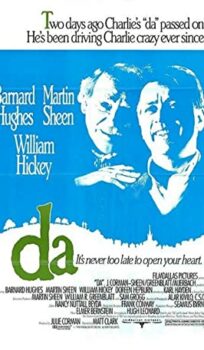