Lola (Gwen Verdon) slips a Mickey to Mr. Applegate, aka the Devil (Ray Walston), and puts him to sleep while the Washington Senators play against the New York Yankees for the American League pennant.The Senators are leading in the nineth inning, when Applegate wakes up and gets to the ballpark. He punishes Lola by turning her back into the ugly girl she was when she first sold him her soul. And he turns young, handsome, athletic Joe Hardy (Tab Hunter) back into old, feeble Joe Boyd (Robert Shafer). Mickey Mantle (played by himself) hits a deep fly ball to Boyd, who somehow manages to make the catch! The Senators win the pennant for the first time in over thirty years.

Joe Boyd races out of the ballpark and returns home to his wife Meg. He fall into her arms, while she sings “There’s Something About an Empty Chair” to him. Since Applegate took away Joe’s youth before the baseball season ended, Joe no longer owes Applegate his soul. Applegate appears in Joe’s house and tries to tempt him to sell his soul again, but Joe doesn’t hear a word Applegate says. Applegate leaves in frustration, and Joe will never leave his beloved wife again. 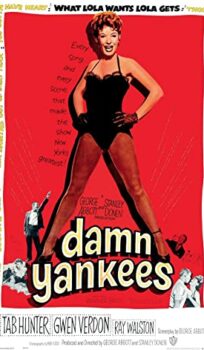