Julie (Frances McDormand), after seeing the coffee cup stain on the Bellasarious Memorandum document owned by Louis Strack, Jr. (Colin Friels) that was made during its brief stay in Peyton Westlake/Darkman’s (Liam Neeson) lab earlier in the film, figures out that Louis was responsible for burning Peyton’s lab. Louis confirms that he masterminded it and that Robert Durant (Larry Drake) had it carried out. When Julie goes back to Peyton’s lab to see him, Durant and his men arrive to attack Peyton and Julie is kidnapped. Peyton disposes of Durant’s goons, and after Peyton experiences a wild ride hanging off of a grappling hook attached to Durant’s helicopter, he attaches the hook to the top of a truck, causing the helicopter to slam into an overpass, the explosion killing Durant (or so we think)

Later in the evening, Peyton goes to Louis’ new building under construction disguised as Durant and meets with Louis, who has a tied-up Julie. When they reach the top, Peyton’s scam is quickly uncovered, and after Louis rips his mask off Julie sees his burnt face for the first time. Peyton has a hellacious struggle with Louis on the beams, which saw him killing his lone henchman and saving Julie from nearly falling to her death, but Peyton knocks Louis over the edge of a railing and then grabs him by the ankle to stop his fall. Louis yells out that Peyton couldn’t kill him, that if he did he’d never be able to live with himself, but Peyton lets him fall to his death, saying afterwards that he was learning to live with a lot of things.

While going down an elevator, Julie gets a better look at Peyton’s burnt face. She tells him that he would perfect the synthetic skin and make their relationship like it once was eventually, but Peyton tells her that he already told himself that many times, but as he was working on the mask he felt that the man inside was changing, becoming wrong, becoming a monster. He could live with it now, but he didn’t think anyone else could. As they step off the elevator, Julie says she wanted their life back, and after they hug he takes off ahead of her, telling her “Peyton is gone.” She tries to catch up to him and looks for him in the streets, but he had already put on a new mask and disappeared amongst the people. 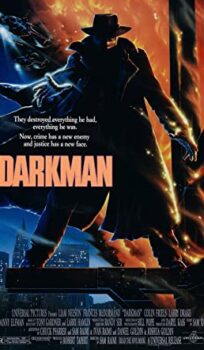