Dave (Kevin Kline), tired of being a puppet, fires White House Chief of Staff Bob Alexander (Frank Langella). In retaliation, and in hopes of advancing his own presidential campaign, Alexander exposes the President’s role in the First Liberty scandal, and invents evidence implicating Vice President Nance (Ben Kingsley). Knowing that his “presidency” is doomed, Dave calls for a joint session of Congress, in which he protests Nance’s innocence, confesses the President’s (and Alexander’s) guilt, and then appears to have another stroke. At the hospital, the comatose President Mitchell is rolled from the ambulance, and Dave escapes unnoticed. Months later, President Mitchell dies, having never regained consciousness, and Nance is sworn in as President. At Dave’s Temp agency, he is shown setting up a campaign for city council. Ellen Mitchell (Sigourney Weaver) comes to see him, and they share a romantic moment. 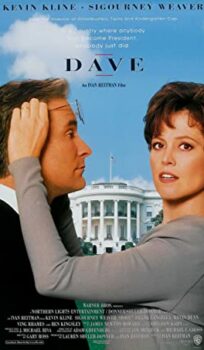