Dawn of the Dead

Michael (Jake Webber), Kenneth (Ving Rhames), Ana (Sarah Polley), Terry (Kevin Zegers) and Nicole (Lindy Booth) escape from the mall and make it to a marina, thinking that their chances of survival will improve if they can get away from the mainland. Michael, who was bitten during the escape, stays behind, shooting himself as the credits roll. During the end credits, we see the survivors run out of food, water and fuel. They manage to land on an island, only to find it infested with zombies.
Thanks, to many contributors. Nobody’s submission was used in full, but these folks all sent something: Alan G, Ryan N, Brandon S, Marcus C, Shane W, K O, SiegeOwns1. 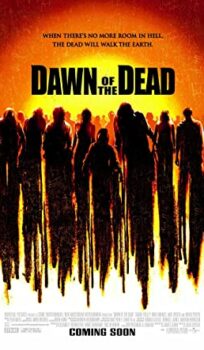