Jenson (Leslie Nielsen), slowly being driven insane from the solar radiation, eventually decides that Steve (Christopher George) is a lousy leader and plans to hike back to the ranger station to get help, and he convinces Beth (Kathleen Bracken), Bob (Andrew Stevens), Shirley (Ruth Roman), and John (Bobby Porter) to come with him. However, insanity finally takes hold of him along the way, and he leads his group on a road to nowhere before he snaps and kills Bob and terrorizes the others. He ends up dying when he attempts to fight an attacking grizzly bear. The other three wander aimlessly into the following day until they take refuge inside a wrecked chopper in order to avoid an attacking pack of wild dogs.

Frank (Jon Cedar) – who had broken off from the group much earlier with Mandy (Susan Backlinie) to find the ranger station and get help after she got injured by a wolf – loses Mandy to an attack from a gang of vultures and hawks but later picks up a lost little girl. They make it into town but find it evacuated, and they take refuge inside a truck to avoid a crazed dog that crosses their path. After finding that the truck won’t start, Frank leaves the girl in there to get to his car nearby so they can get away, but he gets attacked by rattlesnakes in the car and then the dog kills him.

Steve, Terry (Lynda Day George), Daniel (Michael Ansara), Taylor (Richard Jaeckel), and Roy (Paul Mantee) eventually make it to a camping ground but come under attack from a pack of German Shepherds there. Taylor and Roy are killed, but Steve, Terry, and Daniel manage to escape them by floating away from them down a nearby river on a dislodged dock.

The next day, all of the animals that went mad from the solar radiation are now dead from the same radiation, and the ozone layer has begun to correct itself and cause the radiation levels to decrease back to normal. All of the survivors are rescued by the army.

A surviving hawk flies at the screen just before the credits roll. 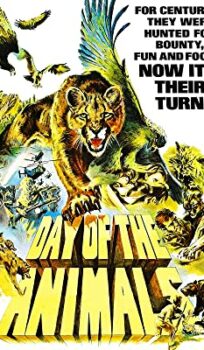