This marvelous Danish film was made during the Nazi occupation of Denmark, detailing the saga of two star-crossed lovers – Martin and Anne – and the cowardice and hatred of those who wish to see good upheld and evil vanquished.

It begins with the hunting of an old woman, Marte, denounced as a witch by “three respectable witnesses.” Marte helped the mother of little Anne escape the stake. Thus she depends on Anne’s much older husband Absalon (an ecclesiastical judge) to spare her. However, Absalon relies on his parishioners’ fears and his reputation among such good people. Marte calls Absalon out as a liar and a hypocrite before facing the flames.

Absalon’s son Martin, recently returned home from a long sea voyage, meets Anne and begins to fall for her. Even though she is now his stepmother, they’re of the same age and passionate temperament. Together, they find the love and freedom that they lack in Absalon and his own mother’s house. Coincidentally (or not), Absalon’s mother is also Marte.

During an argument, Anne admits to her husband that she “wished him dead hundreds of times.” He’d married her without asking what she wanted or caring about her feelings. She’d have settled for a child, but Absalon, being impotent, could not provide one for his wife. Anne also confesses to her love for – and affair with – Martin, knowing that she’s pregnant.

In a terrible storm, Absalon grows faint and cries out that his death has been decided. He subsequently perishes, calling out for his son Martin, who is tormented by guilt over his part in the affair. However, he swears he’ll stand by Anne if his grandmother accuses her of being a witch, as her mother was.

At Absalon’s funeral, old Marte does just that. “My son lies in his coffin murdered, and she who killed him sits there!” she spits, gesturing toward Anne. At first, Martin defends Anne, but when Anne is commanded to swear an oath on Absalon’s coffin that she didn’t kill him via witchcraft, she cannot.

This causes Martin to doubt her for the final time, and to stand with his grandmother, crushed by the pressure she rendered. Knowing that Martin has given up on her, Anne gives up hope.

“With Satan’s help, I killed him. With Satan’s help, I lured his son into my power.” This confession proves both true and false at the same time. The final scene is a rendition of “Day of Wrath,” with Anne’s silhouette against the lyrical backdrop. The cross of Christ transforms into the executioners’ cross, seen at the burning of the first Marte – who’d been innocent. 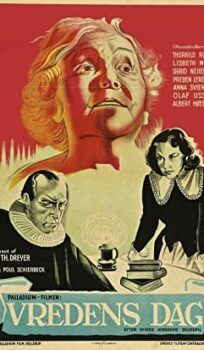