In the year 2009, a plague has transformed almost all humans into vampires. In 2019 the remaining humans are hunted and ‘farmed’ when caught but their numbers are dwindling. Faced with the end of the food supply, unwilling vampire and hematologist Ed Dalton (Ethan Hawke) works for Charles Bromley (Sam Niell) to discover a replacement serum. His brother Frankie ( Michael Dorman ) is a human hunter and the one responsible for making Ed a vampire.

While returning home after another failed substitute experiment Ed inadvertently saves a small band of humans lead by Audrey Bennett ( Claudia Karvan ) which results in his being introduced to ‘recovered’ vampire Lionel ‘Elvis’ Cormac (DeFoe) and discovers that a short intense burst of sunlight will return a vampire to humanity. Ed experiments upon himself, returning to being human. He, along with Audrey and Lionel, contacts his fellow researcher Chris ( Vince Colosimo ) at his home to let him know that a cure has been found. Chris betrays the three by calling a hunt squad lead by Frankie. Ed and Lionel escape only to be cornered alone by Frankie. Ed talks Frankie down but Frankie is starved for blood and attacks Lionel. Lionel survives the attack and Ed discovers that exposure to recovered vampire blood will also return a vampire to humanity.

Ed then walks into his former office where he is taken to Charles’s office. In there Charles has strapped down Audrey and has been draining her blood for his private consumption. Charles reveals that Chris has discovered a replacement serum and that humans are no longer necessary. Ed goads Charles into biting him which returns Charles to being a human. Ed and Audrey then strap Charles to a chair and sends him down an elevator to be ripped to shreds by starving human hunters. Ed and Audrey then try to leave the building but they are stopped by human hunters. Humanized Frankie drives a car into the crowd of hunters and sacrifices himself to the vampires so that Ed and Audrey can escape into the security office. In there Ed and Audrey watch as Frankie sets off a chain reaction by turning the hunters that attacked him into humans who are then attacked by remaining vampires etc… When Ed and Audrey step out there are only a few newly human soldiers left. The soldiers are gunned down by Chris who wants to destroy the cure and sell substitute blood. He is shot and killed by Lionel.

The last scene is Ed, Audrey, and Lionel driving into the sunrise with a voice over by Ed saying “We have a cure. There is still time for you.” 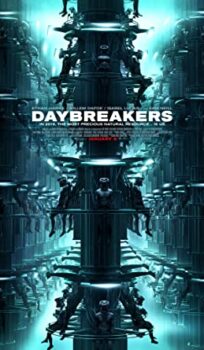