Realizing he couldn’t stand up to his strict father and follow his dream of acting, Neil (Robert Sean Leonard) commits suicide.  This causes a commotion, but Todd (Ethan Hawke) seems particularly distraught over the death. Because of the scandal an investigation is instigated.

Eventually, the club is discovered and the members are all forced to confess. Mr. Keating (Robin Williams) becomes the scapegoat since he encouraged the students. Charlie (Gale Hansen) is expelled after a fight with Cameron (Dylan Kussman) for betraying the club.  The boys return to their monotonous existence and Mr. Keating is fired from the school.

In the end, when Keating returns to the classroom to retrieve his personal belongings, he finds the boys are now being taught “proper” poetry by Principal Nolan (Norman Lloyd). Todd suddenly gets up and tells Mr. Keating that they were coerced into betraying him, but Nolan makes him sit down again.

In a very emotional final sequence, Todd instead stands on his chair and, in a rebellious outburst, exclaims to Keating, “O Captain, My Captain!” Ignoring the threat of expulsion by the principal, most of the club members, except for Cameron, join Todd in reciting the poem.  Keating tearfully smiles and thanks the boys before he leaves. 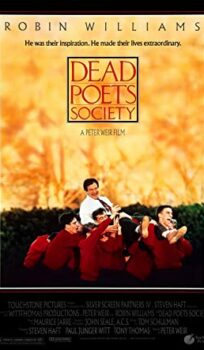