Though Anthony (Larenz Tate), Kirby (Keith David), Skip (Chris Tucker), Jose (Freddy Rodriguez), Delilah (N’Bushe Wright) and Cleon (Bokeem Woodbine) carefully plan the armored truck heist, it ends up going horribly wrong when a lone cop wanders onto the scene. As Anthony and Jose start their ambush on the truck, it draws the cop’s attention, so Kirby starts shooting at him. The cop fires back and wounds Kirby, but he gets killed by Skip soon after. Anthony and Delilah get into a gunfight with the security guards and kill most of them, but Delilah gets killed by one of them while saving Anthony. As the truck tries to get away, Jose puts too much explosives on the truck’s back door, so when he detonates them, it destroys the truck, its driver, and most of the cash.

The surviving five manage to save over $300,000 from the burning wreck, and then they flee when the cops show up. During their escape, Jose leaves the group and goes down an alleyway. One of the cop cars follows him, and as he runs, he frenziedly shoots and kills the driver. This proves to be a fatal mistake, for the car ends up sandwiching him against the wall at the end of the alley and kills him.

The remaining four split the cash up with each other, and give Jose’s family Jose’s share. They all try to lay low afterwards, but Cleon draws unwanted attention from the police when he gives out $100 bills to his congregation and buys a new Cadillac, a car which he obviously can’t afford. He gets arrested, and he decides to rat out the others.

Police barge into Skip’s apartment, but they find him dead of a heroin overdose. They capture Kirby and Anthony at Kirby’s pool hall, just as they were about to leave for Mexico. Anthony is tried, convicted, and sentenced to fifteen years to life in prison, and the movie closes with him on a bus on the way to prison. 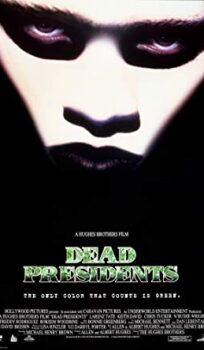