The missing boy who heckled Mary Shaw at her show over 70 years ago is a great great relative of the main character, Jamie Ashen. The boy was abducted by Mary, murdered, and his corpse was transformed into a ventriloquist dummy… which was one of Mary’s attempts to create the “perfect doll.” Thats why she was murdered by Jamie’s great relatives and other townsfolk all those years ago.

Mary Shaw reveals that shes out to kill all the descendants of everyone who killed her… and that she killed Jamie’s wife because the “last Ashen” had yet to be born and was still inside his wife.

At the end, Jamie learns that his father, who supposedly suffered a stroke, is actually dead and that his corpse was being used as a dummy throughout the entire movie. He is being controlled by Ella, who is supposedly his latest trophy wife, but is ACTUALLY a life sized “perfect doll” that Mary Shaw has possessed. She looks at Jamie and says “Now who’s the dummy?” and attacks him… and because Jamie screams, she succeeds in killing him.

The last bit of the movie shows all the people in the movie she killed as ventriloquist dummies in her book. Mary Shaw ultimately wins. 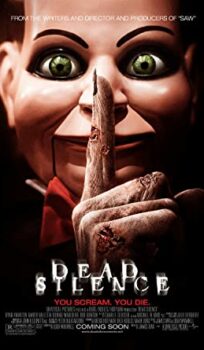